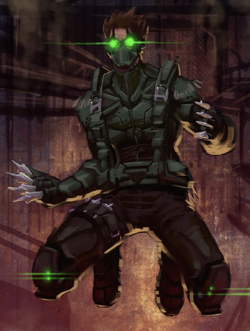 Give me a name. They're as good as dead.

James Buchanan "Bucky" Barnes grew up in Brooklyn in the early 1900's alongside his best friend, the frail Steve Rogers. Bucky was always on edge whenever Steve would get picked on, but knew if he tried to stand up for him, Steve would only get mad, and claim he can handle himself.

When America entered into World War 2, Bucky was quick to enlist, but was reluctant to leave Steve behind. After going through basic training, Bucky was deployed to Germany, where he and his entire battalion were captured by Hydra. Bucky was then selected as a test subject for the Red Skull and his top scientist, Arnim Zola, who were attempting to recreate the success of the Super-Soldier Serum that turned Steve into Captain America.

After what felt like months of torture and experimentation, Bucky and his battalion were rescued by Captain America, who then recruited a handful of them into the Howling Commandos. Bucky then fought alongside his best friend for the remainder of the war, until a failed op against a Hydra shipment being moved through the Alps. During the ensuing conflict on the train, a group of Hydra soldiers wielding Tesseract-powered weapons accidentally blew a hole in the side of the train car. When Captain America got knocked out of the car, hanging on by a loose wire, Bucky ran over to pull him in, only to be immediately blasted out into the rocks below.

Due to the experimentation Bucky endured, he was able to survive the fall, but at the cost of his arm. He was then recovered by more Hydra soldiers, who brought him to Arnim Zola. It was then that Bucky's brainwashing began, as the Red Skull desired to have his own personal assassin, capable of pulling off any mission.

Fashioned with a state of the art bionic arm, Bucky Barnes was essentially erased from his own mind and replaced with a cold-blooded killer dubbed the Winter Soldier. After assassinating multiple people of interest that Hydra no longer wanted involved in the war, including Adolf Hitler, the Winter Soldier was placed in stasis for years at a time until the use for him arose. As the decades passed, he took out countless famous political figures, including US President John F. Kennedy and Howard Stark.

When the modern age came around and superheroes started becoming a normality, the Winter Soldier was taken out of permanent stasis in order for Hydra to use him as one of their most prominent assets in the fight against S.H.I.E.L.D. and the Avengers. After multiple confrontations with each of them, the Winter Soldier felt a twitch in his mind when he saw Captain America. Eventually, Captain America caught a view of his face, and instantly recognized Bucky. When he heard his name, something in the Winter Soldier's programming cracked, and he neglected to finish his mission of assassinating Captain America.

Unsure of who he was or what his purpose was, the Winter Soldier went running, only to be hunted down by Hydra. He fought them off as hard as he could, but was eventually recaptured and continually brainwashed so that they could keep their hold over him.

Retrieved from "https://marvelcomicsfanon.fandom.com/wiki/James_Barnes_(Earth-101)?oldid=250544"
Community content is available under CC-BY-SA unless otherwise noted.