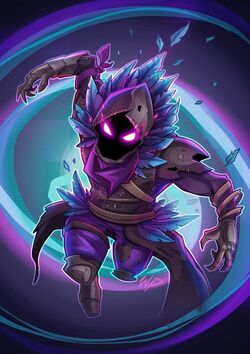 Brown
Unusual Features
Purple eyes with black sclera when mutant powers are in use.
Status
Citizenship

Greetings from the shadows.

Reaper was born Jagger Wolfgang Eisenhauer in New York City, New York to German immigrants who unfortunately passed away when he was just a newborn. As a result, he was put in an orphanage where he was adopted by Victor von Doom. On Jagger's 5th birthday, his powers started to surface and it caught Victor's attention. A well-known scientist himself, Victor took a small sample of Jagger's blood and began to examine it, only to discover that Jagger was born with the X-Gene, meaning that he was a mutant. Due to Jagger being young at the time, Victor decided not to tell him and let him live his childhood.

However, during his grade school years, Jagger's powers completely developed. When he was playing during recess, he began to experience his abilities -- his eyes (sclera) began to turn black and his pupils began to turn from brown to purple. Soon, purple flames began to burst out of his body, setting the playground on fire and scaring the children. The incident caused the school to call the parents and Jagger was left shocked at what had happened. But since that day, the children were too frightened to play with him and some of them began to pick on him where it had gotten so bad that Jagger ended up snapping at them, igniting his powers. Despite suffering non-life-threatening injuries, the parents ended up chastising Jagger, calling him a monster, forcing Victor to pull him out of school after a fiery confrontation.

When Victor checked on Jagger to see if he was alright, he saw that his room was completely burned, small purple flames slowly dying out. He saw Jagger and tried to comfort him only to be asked if he hated him. Victor shook his head and reveals to him that he was born a mutant, meaning that he was born with superpowers. He also informed Jagger that he wouldn't ever hate him because of his powers and stated that he was special. Jagger didn't believe his words but Victor tells him that regardless of his powers, he was still his son. Days later, Jagger was given the invitation to attend the Xavier School for the Gifted Youngsters, courtesy of Professor X who was good friends with Victor. Jagger accepted the offer, hoping for a fresh start of his life.

Life at the Xavier Institute

When he first arrived at the Xavier Institute, Jagger kept to himself, fearing that the other students will ostracize him because of his powers but he wasn't realizing that everyone in the school had extraordinary powers just like him. One day, Jagger got frustrated coping with his abilities, he ended up setting his dorm room on fire as he did in his bedroom back at home and it caught the attention of Professor X. Jagger tries to leave the room, but the Professor stopped him, asking him why does he believe he hates him. Jagger soon realizes that X has read his mind and tells him about the incident back in school and how the children became frightened of him and started to pick on him.

Calmly and kindly, Professor X informed him that all of the students in the Institute have had the same experience as Jagger, making it the reason why he founded the school -- to help young mutants embrace their power while getting the education they need and Jagger knew that he wanted to be treated like the other people and he promised his father that he wouldn't let him down when he got enrolled and he would be disappointing him if he broke that promise. Jagger soon gives in, giving Professor X the chance to help him accept who he is and learn how to use his powers.

Years had passed and Jagger started to come out of his self-reservation and began to interact with the other students, mastering his powers with the help of the instructors of the Xavier Institute such as Wolverine and Hank McCoy, learning to keep his power in his control. He would come home during the summer and winter to spend time with his father, telling him about his experience and the friends he made. Also, while he training to use his powers, Jagger began to develop a love for music, his guitar being his favorite instrument as spare time for himself while not training with the veterans or doing classes.

The Reaper is Born

Jagger graduates from the Xavier Institute and decided to work at a music shop which has a stage where he began to practice on his guitar, attracting a couple of other musicians who were present and they began to form a band with Jagger, catching him by surprise. However, they began to form a bond with one another and when he revealed his mutant powers to them, he felt nothing but love from them for they think mutants are still human and they're actually fighting to protect from being harmed which brought happiness within Jagger. But while he was starting his day the shop, a group of robbers barged in, armed with weapons demanding the money while holding his boss at gunpoint.

Jagger tried to intervene, but the lead robber pistol-whipped him, making his boss scream in panic while remaining held at gunpoint. Jagger tried to get up but the other robbers began to beat him senseless. It wasn't until the leader shot the boss dead right in front of Jagger and within seconds he unleashed a great ball of dark fire in anger, knocking the robbers off of him and attacks the leader with his powers. The robbers try to shoot Jagger, but he remained standing as his gunshot wounds began to heal rapidly. His eyes soon began to change, his abilities reaching to its max and he ended up burning the entire store, killing the robbers along with it. Realizing that this was he is, he decided to leave the now destroyed music shop and the band he had bonded with, letting them know that he had to 'leave for a while'.

After the incident, Jagger began to hide away from the public as he started to notice many criminals lurking all over New York City. He began to create a special costume for himself, thinking about his times at the Xavier Institute and watched the news of the X-Men who was led by Professor X at the time and enters the world of vigilantism, naming himself The Reaper.

Retrieved from "https://marvelcomicsfanon.fandom.com/wiki/Jagger_Eisenhauer_(Earth-7090)?oldid=265364"
Community content is available under CC-BY-SA unless otherwise noted.