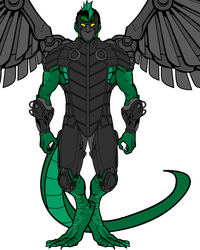 Jaden is the experimental son of Tony Stark with an unknown mother. He was made using Tony's DNA and that of a random female SHIELD agent before being artificially grown in a test tube for nine months. Once he was fully developed as a child, scientists removed him from the tube for him to make his first breathe in the world and the sudden change from the small, fluid filled environment to that of the outside world triggered an unexpected mutation. Though shocked by the unexpected activation of an X-gene, SHIELD still viewed this as a possible additional asset for a sleeper agent later on of which was the point of Jaden's creation.

Following this, Jaden was taken to a foreign orphanage in Hungry where a SHIELD agent moved a few blocks away to keep an eye on the young future agent. It would be from here that Jaden would grow up and make use of skills from his environment from a very young age. The orphanage he resided in was a decent place but within a rather small village with little to do, which led the two owners of the orphanage to keep the children busy with helping with chores and businesses around the village. Though due to his appearance Jaden was often rejected with job proposals or help, leading him to become somewhat depressed and having little food since the orphanage went without much. Out of spite, Jaden began using his powers to steal and play pranks on the town throughout much of his younger years until he was about nine.

At that time, a gang came across the town by chance and decided to turn the village into a lucrative area for various trafficking of drugs, weapons, and other unsavory business investments. Threatened by the gang of harm in a town that had few resources to fight back there was little that could be done as the group turned the place into a sort of hellhole, angering many but not much could be done. Not wanting to roll over for the thugs though, Jaden was one of the few who decided to do something about it and often made ventures to his library to use their books to seek some solutions and using the coffee shops computers to learn about engineering and fighting, practicing them in secret at the orphanage when he could. After about a year, Jaden began using these skills to fight back against the thugs while using his unrefined stealth tactics against them and rallying some behind him to fight back.

Unintentionally, Jaden became a sort of hero in his own right in slowly fighting off the more major issue of the village. With some effort he also got some help from the local law enforcement that hadn't become corrupt from the organized crime and began helping to bring the gang to justice or forcing them out. By his teenage years, Jaden had his own codename and had made a makeshift armor suit inspired by Iron Man, unknowingly his father, to held fight back. Once things had settled enough the agent who had watched him from afar finally approached him about a proposition of joining SHIELD, explaining some of why he was there and even though he was reluctant at first Jaden finally agreed to come with.

Following in leaving Hungry, Jaden was initially taken to the Helicarrier to undergo some basic training with other Junior Agents where for once he was met without rejection and discrimination of his reptilian appearance. Finding some had powers as well, Jaden actually found himself at home among the SHIELD agents and began to refine his current skills for better use. But this training lasted only for a few months before Jaden was pulled from their lessons much to his disappointment but was actually asked by Maria Hill to become part of the new Avengers Academy open with a catch: being one of her moles to watch the new students closely.

Though reluctant to be a snitch of sorts, Jaden almost disagreed before Maria put in that she would disclose the full truth of his creation should he agree. Finding this offer too good to pass up, the sixteen year old mutant quickly accepted and was put on the new roster of students and moved to the Los Angeles to attend the new academy under his previous and new ambitions for his heroic career.

He has the same strength as a man his age and height who engages in moderate to intensive exercise.

Retrieved from "https://marvelcomicsfanon.fandom.com/wiki/Jaden_Stark_(Earth-7194)?oldid=259050"
Community content is available under CC-BY-SA unless otherwise noted.