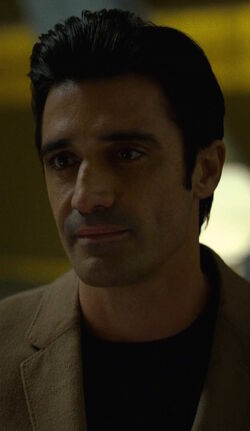 Earth-1010
Base Of Operations
Mobile, though he predominantly operates out of the New York area.
Characteristics
Gender

Single
Occupation
Waiter; former helicopter pilot, mercenary, officer in the French Foreign Legion, member of the Chaste
Legal status: Jean-Paul is a citizen of France with no criminal record. His legal status within the United States, if any, is unknown.
Origin
Origin
Creators

First appearance
Come As You Are

Jacques first met Marc Spector, when Spector was enrolled in illegal fights. The two became close colleagues and Marc took to calling him "Frenchie". Frenchie and Marc shared several adventures together, but their relationship grew even stronger when Marc decided to take up the mantle of Moon Knight. Frenchie worked with Spector for many years as the pilot of a specially designed Moon-Chopper.

Frenchie was secretly a member of the Chaste, an ancient ninja organization, sworn enemies of the Hand.

Listen to me asshole, I don't care what the Hand wants with me or anyone else, this is not my war!"
"The Hand didn't send me, Stick did.

When Elektra chose to leave the Chaste in order to pursue a doomed relationship with Matt Murdock, Duchamps was ordered by Stick to assassinate her for her betrayal. Tracking her to a private airport, Duchamps initially greeted Elektra and began flirting with her, as she assumed a false name and flirted back. However Duchamps soon revealed his true intentions of being there, noting the number of assassinations Elektra had done throughout her long career with the Chaste.

Elektra happily agreed to the challenge and invited Duchamps to try and kill her while she finished her drink. The pair battled throughout the airport, proving themselves to be equally matched due to receiving much of the same training within the Chaste, with Elektra at one point using a corkscrew to try and stab Duchamps in the chest but she was soon disarmed. When Duchamps was able to knock Elektra to the ground, he revealed his hidden weapon, a pair of deadly twin sai hidden within his jacket which he attempted to kill his target with.

Duchamps however was swiftly disarmed and Elektra stabbed him in the back with his own Sai, cruelly twisting the blades to maximize his pain. Elektra mistakenly told Duchamps that she believed he was working for the Hand and told him she did not care what the Hand wanted with her as she was not part of the war. Duchamps corrected her mistake and noted that it was Stick who had sent him on the mission. Mortified, Elektra ripped the blades from Duchamps' body and stole the sai for herself.

After his encounter with Elektra, Frenchie became paraplegic and started to require prosthetic limbs in order to walk. He left the Chaste and started working as a waiter. However, he still maintained a close friendship with Marc Spector. He's involved with his business partner and physical therapist, Rob.

Retrieved from "https://marvelcomicsfanon.fandom.com/wiki/Jacques_Duchamps_(Earth-1010)?oldid=198761"
Community content is available under CC-BY-SA unless otherwise noted.