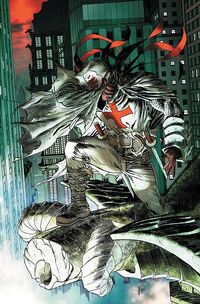 Stryker assumed it was an act of God that had bestowed the extraordinary abilities to his son at that particular moment. He was intended to survive to accomplish his mission in life. However to ensure that Jake would be compliant, he had his mind wiped, leaving him a blank slate for Stryker to graft his own personality onto. After retraining Jake and seeing the potential of his powers, William felt his son was now ready to hunt down the mutants. Stryker branded his son's chest with a cross, now calling him Prophet. William's creation was released upon the world to enforce the will of God.

As Prophet, Stryker was seen as the leader of the Purifier forces, though he preferred to work alone. He single-handedly started a war on mutantkind, provoked by the assassinations of Charles Xavier and Magneto. Prophet welcomed other mutants to rise up against the Purifiers as they would be struck down by him personally. William took advantage of his son's brutality by seeking out mutant resistance forces such as the X-Men and the Brotherhood of Mutants. He located their base of operations and sent his Purifiers to destroy them. No groups came out of the massacre intact. Mutants and Purifiers alike had heavy casualties, though the mutants had lost several prominent leaders in the process.

It seemed as if mutantkind no longer had any major defenses until the reappearance of Kayla, now called Firestar, who lead the Brotherhood on an assault of the Purifiers' HQ. William ordered Jake to eliminate Bishop before she could commence her invasion. Prophet obliged without hesitation.

Retrieved from "https://marvelcomicsfanon.fandom.com/wiki/Jacob_Stryker_(Earth-202)?oldid=17066"
Community content is available under CC-BY-SA unless otherwise noted.