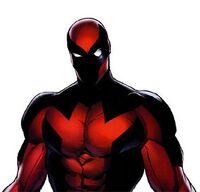 Stryker assumed it was an act of God that had bestowed the extraordinary abilities to his son at that particular moment. He was intended to survive to accomplish his mission in life. However to ensure that Jake would be compliant, he had his mind wiped, leaving him a blank slate for Stryker to graft his own personality onto. After retraining Jake and seeing the potential of his powers, William felt his son was now ready to hunt down the mutants. Stryker branded his son's chest with a cross, now calling him Prophet. William's creation was given a team of augmented Purifier's and released upon the world.

Retrieved from "https://marvelcomicsfanon.fandom.com/wiki/Jacob_Stryker_(Earth-202)?oldid=16443"
Community content is available under CC-BY-SA unless otherwise noted.