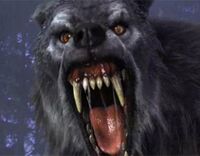 Jacob Russoff was the elder of two children sired by Gregory Russoff, a Transylvanian baron and scholar. Russoff's ancestor Grigori first brought lycanthropy (turning into a werewolf) upon the family when in 1795 he tried to rescue his wife, Louisa, from the vampire-king Vlad Dracula and was bitten by a female werewolf. Because his children were born before that event, Grigori's descendants did not immediately become werewolves themselves; however, the curse on the Russoff family only needed a catalyst to trigger it. In the mid 1950s Gregory Russoff, great-great-grandson of Grigori, acquired a copy of the Darkhold, which includes the secret origin of lycanthropy. By reading that passage, Gregory activated the curse and became a werewolf. He sent his wife, Laura, to her native America with their children for their own protection. Gregory was eventually killed by an angry mob. Laura Russoff married again, to a man named Russell. Jacob Russoff became Jack Russell, and with his sister Lissa was raised in Los Angeles. When he turned 18, the curse struck him in turn and he became a werewolf. For about two years, Russell became a werewolf by night during the full moon. He took precautions to lock himself up, but sometimes the wolf escaped. During that time he never took a human life, although several of the persons he encountered were scarred or crippled. As a werewolf, Russell encountered Moon Knight, the Hangman, Sarnak, Doctor Glitternight, the Hunchback, Tigra, and DePrayve.

Mysterious beings known as "The Three Who Are All" partially lifted Russell's curse: he could change shape voluntarily at any time and retain his human intellect while in werewolf form. He became an occasional crimefighter, once encountering Iron Man in New York. Unfortunately, the curse still applied on nights of the full moon, when the wolf's mind supplanted Russell's. He designed a virtually escape-proof cell for those times. Years later he joined the Midnight Sons to stop Dracula and help his friend Michael Morbius.

Retrieved from "https://marvelcomicsfanon.fandom.com/wiki/Jacob_Rusell_(Earth_-_23681)?oldid=255134"
Community content is available under CC-BY-SA unless otherwise noted.