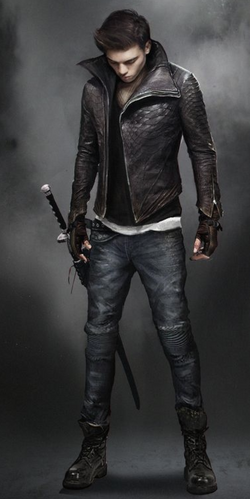 If God is real... he really doesn't like me.

Jack Denver's mother abandoned her family not long after her child was born. He was then raised by his father, who was a Priest at the local church. Jack was raised to rely on his faith, but when he was 17, he discovered that not only was his father a rapist, he was a member of a local cult that worshiped the demon Blackheart.

Jack felt betrayed, and destroyed. He stole the sword that his father kept on display, discovering it held demonic properties, and used it to slaughter the cult. However, the use of the sword for the first time in centuries tore a hole between the physical realm and Mephisto's realm, releasing a horde of demons.

Jack then took it upon himself to hunt them all down and destroy them, in the process saving countless human lives. Realizing that this was now his purpose, Jack decided to cut off his feelings and go on the road, hunting down whatever monsters he could find. This eventually led to him crossing paths with a woman named Elsa Bloodstone, who made him feel for the first time in years. The two of them decided to work together, which eventually led to them forming a relationship.

Jack would eventually discover that his father had originally intended to use him as a sacrifice in order to provide a physical body for Blackheart to inhabit. When Blackheart attempted to enact a plan to take Jack's body for himself, he and Elsa found themselves allied with Doctor Strange and the Ghost Rider. They wound up in a final battle within the Sanctum Sanctorum, attempting to close a portal to Mephisto's Realm. In the end, Jack offered himself to Blackheart and Mephisto under the condition that they leave Elsa and the others alone. Elsa begged him not to, but the deal was already made. However, things did not go exactly the way he had planned. Blackheart had always been able to walk the physical plane, but now Jack's very soul would be added to the collection that fuels his power, while keeping him alive and feeling everything.

[[Category: In a Relationship with Elsa Bloodstone Characters]]
Retrieved from "https://marvelcomicsfanon.fandom.com/wiki/Jackson_Denver_(Earth-101)?oldid=250411"
Community content is available under CC-BY-SA unless otherwise noted.