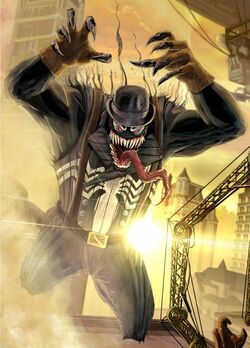 Jack the Ripper was an infamous alias given to an unidentified serial killer active in the largely impoverished Whitechapel area and adjacent districts of London, England in the later half of 1888. His identity remained unknown to Scotland Yard, but the Central News Agency kept on calling him as Jack the Ripper due to his brutal series of killings, murdering at least five prostitutes, and secretly more others that were still uncovered by the public. What became of the Ripper following the infamous 1888 murders is largely unknown. There were over a hundred hypotheses and theories about the Ripper's identity, though none of them were able to prove who the sadistic killer really was.

Unbeknownst to everyone else during the time, Jack was on the verge to perform another kill on a scientist inside a small secret warehouse, when one of its mysterious test subjects were able to escape its secured container, revealing to be a some sort of extraterrestrial, symbiotic lifeform in the form of a spider, something that most would be later mistaking as a parasite.

Before Jack was going to push his knife straight to the scientist's heart, he was caught by surprise when the symbiotic alien costume, attacked and bonded with him, drawn by his despair, adrenaline, and fierce hate, on which it fed. The symbiote bonded mentally and physically to the Ripper, whose antisocial, psychopathic, and sociopathic tendencies towards everyone had further corrupted it, causing it to become increasingly ravenous and bloodthirsty.

Fully embracing the great power that he gained at the moment, he subsequently devoured the scientist afterwards without hesitation, much to him and both the symbiote's delight. A pair of kingsmen agents came to investigate the screams of the scientist inside the warehouse, only to see the semi-amorphous monster with a fanged maw, claws, and thorny tendrils, who also came to attack and devour the agents afterwards as he escapes the warehouse itself, leaving no traces of his or anyone's presence behind.

Ever since Jack finally embraced as he mutually benefit with the mysterious symbiote who merges with him earlier, he once again began to perform another series of killings across the isolated streets of London, as he murders anyone he pleases to kill, to which the alien would consume his victim's brains just as well, decapitating them in the process. Due to the traces left by his series of killings found by the Scotland Yard, the Central News Agency has often nicknamed this "new" killer as many infamous names, such as the Parasitic Killer, the Carnage Killer, and even sometimes the Zombie Killer, due to his disturbing way of leaving the bodies of his victims headless.

Eventually, his deadly presence had gotten the attention of a secret organization who deemed to stop his threatening actions from ever worsening and spreading beyond London. After the young genius named Anna Reilly, a newly-found member of the said secret organization, was able to use her scientific intellect and convenient weaponized inventions to track down the symbiote-powered Ripper, and confront him one last time to make him pay for all of his heinous crimes, which actually included the brutal murders of both her parents who were revealed to be members of the Scotland Yard who died from the Ripper's brutal and merciless slaughter on several police officers.

Duel to the Death

Tracking down the symbiotic Ripper in a wide and slightly populated area near the Big Ben as he causes terror across everyone there, a mechanized-suited Anna heroically came to the scene and immediately fired her lethal at the Ripper in a fit of rage, starting their first and final duel and Anna's long-time quest to ultimately avenge the countless victims of the Ripper's killing spree. The two kept on battling across the city of London, their clash has caused mild destruction in their every path, although Anna still has tried her very best to keep the Ripper away from the civilians, eventually leading for the two to accidentally land into an active factory, crashing through the roof of the very building. As they continued clashing, Jack thought Anna's combat was becoming too predictable, as he remarked, to which he almost immediately got the best of her in combat, leading to the Ripper momentarily knocking her down, which also got her suit irreversibly damaged.

Jack's first intention was to brutally murder Anna and devour her, although he felt like doing it immediately would be too easy for her, and instead had decided first to attack the fearing factory workers who were already running for their lives. Anna felt powerless, right until the Big Ben started to ring since it was already twelve in the afternoon, rendering the symbiote with unavoidable pain. Once the symbiote was feeling continuous pain due to the ring of the clock tower, Anna used the advantage of the symbiote's weakness, followed with her finally giving Jack a fatal push into a crucible steel below, to his own demise. Falling into the fiery liquid of the melting cast iron, the Ripper tried to drag Anna with her through his tentacles, only for the latter to remotely control her own suit, the mechanized exoskeleton to protect her from his last attempt, taking the suit instead as it falls with Ripper into the burning pot of hellish liquid, effectively killing him along with the symbiotic lifeform, bringing an absolute end to Jack the Ripper's reign of terror in London.

Venom Symbiote: The alien costume, which had grafted itself to the nervous system of Jack the Ripper. These powers had been transferred to the serial killer, so long as he wore the costume, and combined with his natural bulk made the symbiote physically stronger than the strongest of men. Even without the symbiote, the Ripper is still considered very dangerous, as his Antisocial Personality Disorder and obsession with chaos make him impossible to reason with and he has no trouble with killing with no motive. Ultimately the costume's influence hurt more than helped Brock's psyche, and when he finally realized this himself he decided to auction it. The symbiote grants the Ripper the following powers:

Retrieved from "https://marvelcomicsfanon.fandom.com/wiki/Jack_the_Ripper_(Earth-61656)?oldid=259652"
Community content is available under CC-BY-SA unless otherwise noted.