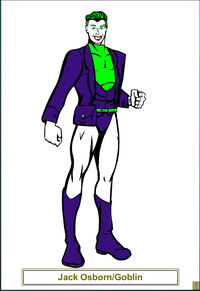 Jack Osborn was born to the Osborn family. His father was a failed inventor, who said that his inventions were swindled away from him. Amberson was abusive to Jack, taking his anger out on him. Jack decided that he could no longer depend on his father for money so he got an after school job and saved every dime that he made.

Jack married his college sweetheart Jeanie (a fusion of Jeanie and Emily Osborn), and they lived together in a small apartment in New Gotham. At this point Jack was working in a chemical factor but then decided to try out his lifelong dream of being a comedian. The first night he was on he was booed off the stage, and went home depressed.

Eventually, upon returning home from his work, he learned that Jeannie had been killed during a robbery of their home. She died in the hospital, but they managed to save their son, whom he named Harvey.

Jack was in a deep depression after Jeanie was killed, and was very hard on Harvey, being just as bad as his own father. While drunk, Jack would play a demented game with Harvey involving a double sided coin he had. Harvey fought back the first time, but he got beaten even worse afterwards, and never fought back again. Jack said it would be even worse if he told somebody about what he did.

A Chance for a Better Life

Jack eventually reunited with one of his teachers was Dr. Mendel Sartorius (a fusion of Alex Sartorius and Mendel Stromm), and he saw eye to eye on science and they decided to form a company together, forming a partnership. Jack put forth more money that he had saved so the company they formed was named OsCorp. Jack told Harvey that it was a chance to have a better life.

OsCorp started out small but eventually expanded, becoming one of the most powerful companies in New Gotham, rivaling Wayne Enterprises. Adding onto to his already sustained emotional scars Jack stopped abusing him, but outright ignored him, being buried in his work.

Years after Peter Wayne had left New Gotham, Jack tried to have a takeover of Wayne Enterprises. During the process Peter came back to New Gotham and fought back against him, eventually stopping it. Upon talking to Jack about it Jack said that, "It was just business."

At the same time, OsCorp has been trying to recreate the super soldier serum from World War II. It had been taking a long time and the military said that they wanted results in two weeks or else they would pull Jack's funding. To add onto the trouble Jack learned that his trusted partner Mendel Sartorius had been embezzling money from the company. Jack decided to continue looking through Mendel's things and found a copy of the formula for the perfected version of the serum, and saw that he was going to sell it to the highest bidder. Jack confronted Mendel while he was fixing the reactor core of the OsCorp lab and said that he was going to have his head for what he did. Jack then turned to leave. Not wanting his career ruined Mendel came at him with a wrench, and he and Jack had a struggle. Mendel's physical attributes had improved since he had taken some of the formula. Jack managed to knock Mendel back, making the crack in the reactor core bigger and getting five million slivers of radioactive material fired into his body, and his body began to burn and he fell to the ground, and was thought to have died. Jack had his body removed, and the reactor core fixed.

Birth of the Goblin

Taking the perfected formula Jack began to work on it long through the night. Eventually Jack left to get some needed materials. Unknown to Jack, Harvey tampered with the formula, by adding some deadly chemicals into it, as a way of lashing back for all of the abuse he had faced. When Jack got back to his lab, he finished it and then inject himself with it. Because of the chemicals Jack's skin turned white, his hair green, his lips red, and his mouth was curved into a permanent clown like grin. He was now the Goblin. The Goblin stole experimental weapons from a weapons storage including pumpkin bombs, razor bats, a glider, and more.

The Goblin attacked and killed the generals who were going to pull his funding. The Goblin had more plans in store, including uniting the smaller gangs of the city to his rule in order to overthrow Carmine Fisk, the Emperor. Lastly, he wanted revenge against Peter Wayne, and Wayne Enterprises.

Retrieved from "https://marvelcomicsfanon.fandom.com/wiki/Jack_Osborn_(Earth-367)?oldid=257938"
Community content is available under CC-BY-SA unless otherwise noted.