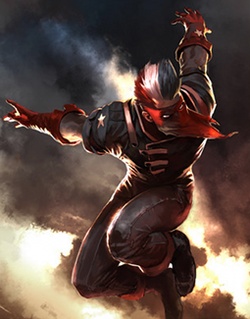 Single
Occupation
Vigilante, hero, adventurer, Avenger
Education
Formal education, extended education by self-teaching, military training
Origin
Origin
A former US Military personnel, Jack Flag becomes the third person in the US to become a super-soldier, after both US Agent and Proticide.
Creators

You know, I have just known the reason why Mr. Walker invited me to the New Avengers. He's a super-soldier, so am I. I am the second, official, super-soldier in the US. I also knew him before he became some sort of perfect human. I just got in another way to become a super-soldier. It's an honor for him to invite me to the new group of earth's mightiest heroes.

Jack is an accomplished acrobat and combatant, being trained by the US Military. Jack is also an expert military operator, tactician, as well as a decent infiltrator. Jack is also capable of handling nearly all kinds of military-grade weapons. In order to compensate for his lack of enhanced speed, Jack has trained in sprinting.

Jack has no notable weaknesses.

Transportation: The Quinjet
Weapons: None known.

Jack was 25 years old when he joined the New Avengers.

Retrieved from "https://marvelcomicsfanon.fandom.com/wiki/Jack_Harrison_(Earth-4045)?oldid=153798"
Community content is available under CC-BY-SA unless otherwise noted.