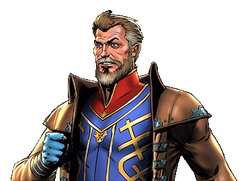 Earth-1010
Base Of Operations
Spartax, Spartoi Empire, near the Shi'ar Galaxy
Characteristics
Gender

In your tiny head, perhaps the line between a criminal enterprise and an empire is thin. In reality, nobody cares. All they care about is who holds the gun, and where they're pointing it.

J'son, also known as "Jason of Spartax", is the Emperor of the Spartoi Empire and father of Peter Quill, alias Star-Lord of the Guardians of the Galaxy. The Spartoi are a sister race to the Shi'ar, separating from their cousins millions of year ago.

He was the only son of the previous Emperor Eson, and therefore was Prince and sole heir to the throne. Rejecting his idealism, the ruling Council of Ministers prevented J'son from taking the throne. The future emperor would be educated, as per Spartax tradition, by being brought up on dozens of the Empire's planets working many professions, including servant, miner, poet, soldier and pilot - excelling in the latter two.

When Ronan the Accuser of the Kree Empire forced the Inhuman Royal Family to attempt to assassinate the Empress Lilandra, ruler of the neighbouring Shi'ar Empire during a wedding ceremony that would symbolically unite the Shi'ar and Spartoi, J'son (who had been seen with the Inhumans) was accused of being part of the plot. For this, he was banished and deemed unworthy of the throne.

However, J'son would later be summoned by his father when war broke out between the Spartoi and the Ariguans. On his way back home, he was forced to crash land on Earth, where he fell in love with a human woman named Meredith Quill. The two began a short relationship before J'son was forced to leave to wage war for the Spartax. Wishing to shield Meredith from the pain of his departure, J'son erased her memories of him, without knowing that the two had conceived a child. Meredith would later go on to give birth to his son, Peter Quill.

J'son would eventually go on take his father's place as emperor. J'son later met his son after Peter had become Star-Lord, and offered him a place as heir to the throne. However, he refused.

Retrieved from "https://marvelcomicsfanon.fandom.com/wiki/J%27son_(Earth-1010)?oldid=149776"
Community content is available under CC-BY-SA unless otherwise noted.