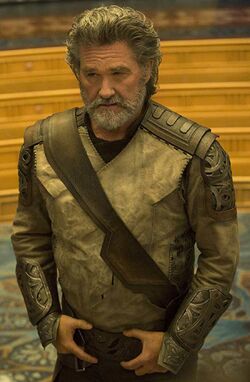 You are a God among men, Peter. If you do this, you'll be just like everyone else.

J'Son Neramani is the ruthless Majestor of the Shi'ar Empire. He is leading their expansion of the galaxy by any means necessary. He has always been adamant about staying out of the Kree-Skrull War, but has a special hatred against the Badoon, who he views as nothing more than savages and thieves.

Eventually, one of his pod ships was shot down onto the planet Earth by a Badoon cruiser. He landed in the backyard of Meredith Quill's farm, who took him in and gave him shelter. He fell in love with Meredith and even sired a son with her. Just as she was about to give birth, J'Son managed to finish the repairs to his ship and return to his Empire, promising to one day return for his son.

However, he became wrapped up in Shi'ar politics and eventually even went so far as to send the Shi'ar assassin Warbird to kill Meredith. He received word that she had been captured by the Badoon, and he assumed Peter had suffered the same fate. He went on to have two more children, this time daughters Lilandra and Cal'syee, by his wife in the Shi'ar Empire, Mo'reen, who died in childbirth the second time. This only strengthened J'Son's resolve in maintaining his authoritarian rule. Cal'syee took after J'Son and grew up to be a ruthless killer who he couldn't be more proud of.

Lilandra, however, became disillusioned with what the Empire stood for, and went on the run. It wouldn't be long until J'Son discovered that his son, Peter, was not only alive, but was the legendary Star-Lord of the Guardians of the Galaxy. After recruiting his son to join the Empire, he tried to sway him to his way of thinking.

However, it wasn't long until Peter discovered the truth about his mother's death. He even recruited J'Son's favorite slave, Mantis, to join the Guardians and help topple the Empire. J'Son was able to round up as many survivors as he could and plan a counterattack on the Guardians. However, their attack was interrupted by the arrival of Thanos and the Black Order, who were hunting Gamora. The resulting battle ended with Thanos shoving his hand straight through J'Son's chest, killing him.

Retrieved from "https://marvelcomicsfanon.fandom.com/wiki/J%27Son_Neramani_(Earth-101)?oldid=250203"
Community content is available under CC-BY-SA unless otherwise noted.