Ivon (Marvyn Dunn or Agent 21) is an Asgardian-Eternal hybrid, who moved to Earth after years in Asgard building his name as an agent of S.H.I.E.L.D. thanks to Mirian Lang. His first missions were taking care of robbers using advanced technology putting people in danger and defeating Grover Industries a group of attackers using Chitauri tech to make advanced weapons and claim the city for themselves.

In 2014, he sacrificed himself to save humans from turning into reptiles and drove his ship into Kitson. There after some time he encountered the Kree Accusers and met his later teammates The Misfits. 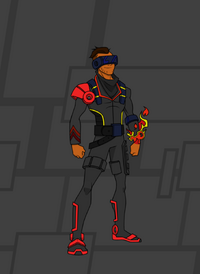 Ivon was born in Asgard, being the son of Thruddah (an Asgardian) and Teson (an Eternal of Earth). Born to both parents' anger, coolness, strictness and absence he developed powers to control the elements of Fire, Water, Earth and Air. His parent's emotions created his powers.

During his childhood, Ivon was a playful character, wreaking havoc on Asgardian markets and parks and always playing pranks. He once got arrested for trying to create a sculpture of the imprisoned Loki as a joke. Thruddah, who was a Valkyrie, always kept him from getting arrested.

In his young age, Teson moved away to take care of his life back at Titan. They would keep contact through Thruddah, who had mind powers which she shared with her husband to contact each other beyond galaxies. After a few months from his quest, they lost their connection. It's almost like he was dying. His last message to her was in her dreams, suggesting that she might be killed by his enemies.

She and her son followed his path and moved away to Midgard from troubles and ensuing death threats. They settled in New York in the year 2010 A.D. with a technician called Dunn Bernadeschi. There, he discovered his powers and how to control them. He visited a Tai-Chi class suggested by his new school friend Mirian, in whom he found a best friend and a future Friend-With-Benefits.

Dunn registered his new family with the government, and they all changed their names. Ivon became Marvyn Dunn Dunnson, and Thrudda became Tabitha Teson. During the Battle of New York, she was killed by a Chitauri soldier. Her death changed his life. It caused his new power of shelling, where he would be covered by any of his powers and could spiritually talk to his dead mother. He was protected from the real world chaos.

He and Dunn moved to Chicago, where he met Mirian Lang and her squad. Consisting of Abe Sancho, Florence Kim, Grace and Jess Ochoa and Amy Scott. They went through many adventures in school.

Ivon's first days weren't enjoyable. Normally butting heads with a bully named Joaquin Fernandez. Mirian was the first person he had a great encounter with and she helped him get through lunch with a table.

"Little do these fools know...I'm a hundred years old."

Mirian Lang, who is a secret spy was a love interest for Ivon commonly having an on and off relationship, but he remained loyal while he was on Earth. After gaining trust with each other they shared each others secrets and she exposed that she was an agent of S.H.I.E.L.D.

Marvyn found out that Mirian was an agent of a top secret enforcement agency, which he also was later recruited to. He joined as a consultant and went on missions protecting the city of Chicago. James Knight, a disguised domestic terrorist for the group Grover Industries (an industry stealing and improving Chitauri tech), tried to win the city's mayoral seat. James lost and went on a rampage with his army to assassinate the mayor. Ivon saved the mayor by paralyzing James' suit. He helped arrest the attacker army and is honored as a hero for the city of Chicago and recognized nationwide.

Ivon later got his Level One Agent badge as soon as he became a junior in high school, and he started working full-time for the organization.

After being an agent, S.H.I.E.L.D. finds an organization named the Unknown Octopus. The organization wanted security in exchange for the people's freedom, which S.H.I.E.L.D. is suspicious of. They sent Agent Mirian in as a double agent and found out they were building an army of humans turned into hybrid reptilians. Ivon and his team consisted of Mirian, Agent Davis McCoy, Agent Steele, Agent Kayla Rodriguez and Agent Sharon Siegfried, led by Agent Maria Hill, did their best to take care of the reptilian invasion and stop the organization. The Unknown Octopus then unleashed their biggest weapon: a kaiju, which went out of control and destroyed the city. Ivon subdued it by drowning it in a lake.

Then after the organization lost, it collapsed, and right after, the boss Dr. Karron Weber revealed that S.H.I.E.L.D. would die, killing himself immediately afterwards...A code went around and a bypass was found by Agent Mirian revealing that HYDRA, was raiding S.H.I.E.L.D. from within.

Ivon, Mirian and Rodriguez find out that their other teammates are HYDRA members, Ivon knew it when the Helicarriers shot at him to kill. Mirian and Ivon were kidnapped by Agent McCoy, who left them in a crumbling cave. Rodriguez found them and took care of the guards who come out of the cave, saving both Mirian and Ivon.

The loyal S.H.I.E.L.D. agents vowed to protect the other loyalists and send them somewhere safe. HYDRA then tried to release an atomic bomb, laced with a chemical that would turn the population into reptiles, onto the Prometheus, Ivon's personal Quinjet. Ivon hacked into it and sped it into low earth orbit. It was a victory, but his ship couldn't slow down, so he sacrificed himself for the good of Earth.

He enters a space-jump and ends up on planet Kitson. The bomb ended up on the planet as well, and exploded in a nearby desert. Ivon and the Prometheus landed near a city from the resulting detonation.

After landing in Ceorus he made a life for himself and survived through a job spree throughout the capital city. Later on he planned to extend his ship and go on to go back to earth. But plans were stopped by Sai the Salvager.

After returning the Aether to the Collector, he went on a quest to look for his brother Valgard who was the only family member left to him. He went to Asgard finding out Loki was dead and occupied as a soldier for the King's Guard. He and the Warriors Three were left in charge to take care of Asgard while Loki and Thor left to find Odin.

Meanwhile he got busy looking for his brother around Asgard. He only found an empty house with all his belongings still in there. He walked in and looked at all the memories that had been made with Valgard. Although Hela arrived in Asgard, Ivon failed to stop her from advancing to the throne. He barely escaped with a knife through his abdomen. Later he went back to Knowhere and treated himself until receiving a distress call with the Guardians.

Being biologically Asgardian (from his mother Thruddah) and Eternal (from his father Teson). Ivon posseses four elemental powers. Being fire, water, air and rock. These which are formed from Thruddah's anger and strictness. The other formed from Teson's calm manner and history of absence in Ivon's life. Further more, Ivon posseses a body mass denser than both humans and some Asgardians, and some Eternals. He is invulnerable to big falls, gunshots (he can get shot but bullets can never penetrate beyond his muscular system.

Allspeak: Ivon has the ability to understand all languages of the nine realms, earth's dialects, other alien dialects and other various universal languages.
Experienced Spy: At his time in S.H.I.E.L.D. he has gone through many top secret missions. Has been trained by the best S.H.I.E.L.D. Agents.

Other Cosmic Blasts: Some cosmic blasts can injure Ivon badly. Maybe even some big explosions (obviously not the Tsar bomb)

Retrieved from "https://marvelcomicsfanon.fandom.com/wiki/Ivon_(Earth-199999)?oldid=256341"
Community content is available under CC-BY-SA unless otherwise noted.