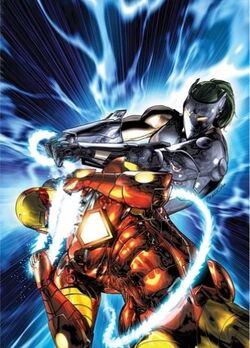 You lose Stark, you lose!

Ivan Antonovich Vanko was a Russian physicist and the son of the disgraced scientist Anton Vanko. Vanko was still very young when his father had died penniless due to the actions of Howard Stark and S.H.I.E.L.D. when Anton proved his allegiance to Hydra, until his very death at the hands of battling Stark's invention.

When he grew up knowing that his real father was actually Anton Vanko who was in fact briefly the short-lived fugitive known as the Crimson Dynamo, he swore revenge against Stark's own son, Tony Stark and the whole Stark family for the ruin and humiliation suffered by his family during his whole life.

Designing similar armor to Iron Man in order to publicly defeat him and destroy the reputation of his family. Although his first attempt failed and as a result of this made him arrested, Vanko eventually joined forces with the CEO and founder of Hammer Industries, Justin Hammer, who recruited him to build the Hammer Drones which Vanko stole in another attempt of Stark's life until he was finally defeated by the combined efforts of the War Machine and Iron Man.

As a result of defeat, Ivan tried to sacrifice himself in a desperate attempt to destroy the Stark legacy, but was immediately stopped by Rhodes, knocking him down before he could've cause further damage, taking Ivan into custody later on after his defeat. Seemingly imprisoned on Ryker's Island for the rest of his life, Ivan vowed against Stark that whenever he manages to get out from prison, he will terrorize and would eve considering on killing everyone that he loved as an act of revenge, before going against Stark himself to try and kill him as well.

While in prison, Ivan became too desperate in escaping the prison itself, to the point where people around the facility have started diagnosing Ivan as mentally-ill, due to the rapid changes in his behavior and personality. As a result, Ivan was forced to be transferred in a more secure, and confined cell inside the prison facility. There, he was imprisoned with the rest of what-people-would-call, the "crazies."

Despite all of this, this actually gave Ivan more advantage and a better chance of escape, after he met a mysterious, strange, but trustworthy fellow inmate Ivan only knew by the name of Ted. Upon meeting Ted, Ivan was convinced by the man that escaping the facility was possible after Ted offered him a place in his scheme, a scheme specifically focused on taking down their most hated enemy, the invincible Iron Man. At first, Ivan had a lot of doubts in him about Ted's plan, believing that Ted might've been scamming him in order to get more information from him, however Ted proved his trustworthiness and honesty to Ivan, after revealing to him every knowledge he know about Tony Stark and the Iron Man.

Ted also revealed that he was a man inside the black market, responsible for selling several advanced technology from various companies and organizations, including Stark Industries' most classified tech, to terrorist and extremist organizations. After having a secret talk with his cellmate, Ted asks Ivan once more, if he's in. Ivan nodded in agreement, and grinned.

All of Anton Vanko, his father's riches have secretly been kept by Hydra until the events Hydra Uprising, where Ivan eventually finds out about that his father's riches and credits (that were supposed to be his rightful inheritance) were kept by the terrorist organization. During the events of Ultimate War, an escaped Ivan, who was finally wearing the specialized Iron Man suit that he bought from the Spymaster, tracked the specific location and went into the secret vault where all of his father's riches and took all of it and left before the Hydra soldiers could find him and track him down. Ivan eventually used his money and converted it to build up his father's legacy by recreating and improving the several advanced super-weapons that Anton built back then, so he used it in his life of crime against Tony Stark and anyone else who would stand on his way.

Eventually later on, Ivan was revealed to have been defeated after failing to defeat Iron Man for the very second time along with other the rest of Stark's rogues, whose all have miserably lost during the final battles of Armor Wars, an event that occurred before the earliest days of Ultimate War had began. As a result of his second defeat, he was once again imprisoned in prison, only this time it was on a much more secured facility, located at Ravencroft Institute. Although imprisoned, Ivan's reclaimed riches were also revealed to have been safe, as he had safely kept them in one of his secret storage unit where nobody else could have find it, not even S.H.I.E.L.D., or even Hydra themselves. There, he eventually had met his new cellmates that were the Liberators, which were the multinational group of superpowered villains across different parts of the globe who once tried to invade the United States, before they were interrupted and were defeated by the forces of S.H.I.E.L.D., the Avengers, and the Thunderbolts. When Ravencroft had experienced a momentary blackout due to an incident caused by the X-Men against the Demon Bear, Vanko was able to escape his cell and led the Liberators into freedom, even starting a relationship with his new teammate Chang Lam, the Abomination, as the Liberators continued their pursuit to "revolutionize the world."

Vanko is a skilled athlete and has great knowledge of technology, as he was able to make his armor from a destroyed piece of Stark Technology.