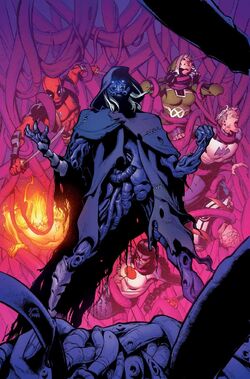 The vines are not my cancer... but they do mimic my cancer. If I'm going down, I'm taking this entire wretched world with me.

Ivan Guerrero has always been a bitter man with a distaste for humanity and general society. When the Terrigen Mists began spreading across the world, Ivan discovered both he and his daughter, Emily, carried Inhuman DNA. While he was wife lost to Terrigenesis, Ivan went insane.

He decided to use his newfound powers to wreak havoc on humanity. However, he was inevitably defeated and captured by the combined might of the Avengers and his own daughter, who had taken on the name Synapse. Rather than be imprisoned on Earth, Ivan was taken by the Inhuman Royal Family.

They attempted to give him a second chance, so that he could redeem himself among his people. However, when Prince Maximus enacted his rebellion, the Shredded Man sided with him, seeking to take power for himself. During the ensuing battle for the throne, he was incapacitated by his daughter, who had grown ashamed of him. Refusing to give up, he used his vines to lay waste to the throne room before having Black Bolt whisper into his ear, completely obliterating his brain.

Retrieved from "https://marvelcomicsfanon.fandom.com/wiki/Ivan_Guerrero_(Earth-101)?oldid=249290"
Community content is available under CC-BY-SA unless otherwise noted.