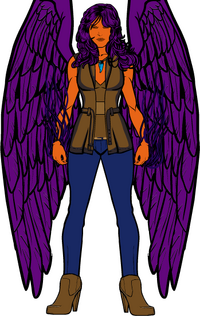 Ita is the result of a Shi'ar agent marrying her mother, Avera Santorem, who is an Inhuman and eventually having a child together. Though at the time of the marriage, her mother was not aware of her father's true nature and it seemed for a time the family would be a happy one, seeming loyal to the Royal Family and remaining so even in times when others threatened Blackbolt's ruling. From a young age Ita was taught the culture, history, and various subjects available on Attilan, including those they obtained from their occasional times of interacting with Earth.

It was from about the age of five or six that Ita began training early on to become a body guard for the palace royals. Under her father's tutelage and those of the other guards, Ita began learning marksmanship, armed and unarmed combat, and how to use various types of weapons. To her father's hidden satisfaction Ita was a natural in being a warrior, something she seemed to inherit from her father and proved herself to be at the top of her class quite often as she grew. But, her training was interrupted when she was selected to undergo Terrigenesis when she was found to be genetically compatible to do so and was taken to the chambers below the city with a few other youths at twelve years of age to undergo the change while unknowingly at the same time her father was discovered to be a spy.

Though initially Ita's change was not clear, when she discovered the truth of her father and everything he had been doing her anger and sorrow triggered her change into a garuda-like creature. Unfortunately, the change initially caused her to go in a berseker rampage that caused damaged to part of the city that took a while for her to calm down. Following the event, Ita found herself completely shunned by her fellow Inhumans, including those she had called friends until the following year she exiled herself from Attilan and eventually ended up in the care of SWORD who took the young teen in when she had no where else to go.

For the next three years, Ita would find herself once more feeling accepted in a place that not only trained her to better control her new powers but also to make full use of them. She received further combat training and showed potential to be another agent for SWORD while in her free time she also began doing more research on Earth, including it's history and cultures that intrigued her. It was here that she came across the legend of the Garuda in Hindu mythology by chance, giving her the inspiration to take up the codename.

Eventually when Ita reached sixteen, she saw news of the new Avengers Academy being opened and with her usual curiosity researched more information on it. When learning of the exploits of the Avengers and other heroes, Ita became inspired to join the team herself and sought permission from SWORD superiors to do so. After a little thought they allowed her to go to Earth to continue her education there and within a day or two Ita arrived on the door steps of the Academy, taking it upon herself to enroll and attempt to become a hero in her own right.

Ita can lift 1 ton in her regular form and 4 tons in her transformed state.

Retrieved from "https://marvelcomicsfanon.fandom.com/wiki/Ita_Santorem_(Earth-7194)?oldid=163403"
Community content is available under CC-BY-SA unless otherwise noted.