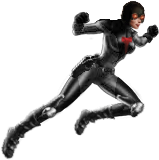 Smasher has the same origin as her Earth-616 counterpart.

Smasher and Gladiator were sent by Emperor D'Ken to capture his subversive sister, Lilandra. However, Phoenix was aiding her and the mutant easily defeated both Guardsmen.[1]

Smasher was also part of Lilandra's task force against all mutants, in order to make them pay for what Phoenix had done and she battled Sunspot.[2]

Izzy possesses the Exospex which grant her the use of superhuman powers, but only one at a time:

Without the Exospex to enhance her strength, Izzy is a normal human female who engages in moderate regular exercise.

Equipment: Exospex: These special goggles are advanced Shi'ar technology which enable their user to download additional superhuman powers, but only one at a time.
Transportation: None known.
Weapons: None known.

Retrieved from "https://marvelcomicsfanon.fandom.com/wiki/Isabel_Kane_(Earth-1010)?oldid=204710"
Community content is available under CC-BY-SA unless otherwise noted.