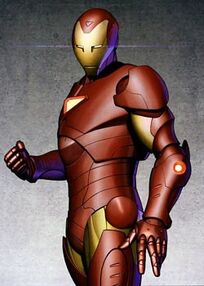 I am the new and improved Iron Man.

Thomas spent most of his childhood in a orphanage after his parents died in a Car Crash. At the age of 12, Thomas orphanage was visited by Tony Stark. Thomas showed Stark his invention that turned any liquid into water and converted gas into liquid. Stark adopted him as he saw a younger version of himself.

When Thomas was 16 he entered a chamber where he was sprayed with a sort of gas, Thomas thought it was to cleanse him of disease but in fact it infected him with Vibranium Poisoning. Thomas discover this and kept it a secret from Stark.

When The Hulk went threw a rampage around New York, Tony suited up and tried to stop him but it resulted in the two having a fight in a Oil Truck Garage. Hulk threw Stark into a truck and and clapped his hands setting a trail of oil on fire causing it to blow up.

At the funeral of Tony Stark, Pepper told him that in Tonys will he left Stark Industries to Tom and all of his suits. Thomas then spent the rest of his day in the hall of Armour.

Thomas arrived at the Funeral of Tony Stark where all The Avengers and their allies stood outside as he and Pepper would be the first to enter, Thomas walked out of the car but something was wrong the Vibranium Poison had aged his skin. Thomas walked the carpet to enter the Building but collapsed. A Iron Man suit programmed by J.A.R.V.I.S told him that his cure was ready. The Suit got ready to carry him but was destroyed by Iron Patriot. The Hulk then carried him and jumped all the way to Stark Tower while being pursued by Iron Patriot.

Retrieved from "https://marvelcomicsfanon.fandom.com/wiki/Iron_Man_(New_52)?oldid=248857"
Community content is available under CC-BY-SA unless otherwise noted.