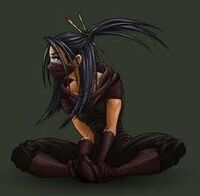 Single
Occupation
Immortal Weapon, adventurer, Agent of Shield, Ninja
Education
Train to be a ninja by the Hanzō Clan. Study at K'un-Lun like the other Iron Fists before her.
First appearance
Unknown

Vanessa was is raised by the Hanzō Clan to become the most lethal samurai and ninja of in the world. Vanessa was orphaned at the age of six when her parents were killed by The Hand. Vanessa was extremely bright and became a very skilled marshal arts. Vanessa's shyness often made her a social outcast and a target for bully named Takeshi. Takeshi was next in line to become the next successor of the Hanzō Clan before Vanessa came. As they got older, Vanessa proved to be extremely bright and became a very skilled martial arts, She quickly began to surpass Takeshi's abilities and was the Hard Master's choice to succeed him as the head of the clan. Takeshi saw Vanessa as a treat to his growing power.

On Vanessa 18 teen birthday away from the Hanzo Clan in the city, She and her two friends both ninjas were attacked by the Hand lead by Takeshi, himself. Takesh had learned of her secret past and sold her out to the hand who were still looking for her. It looked bad, the Hand was 10 plus Takeshi against three. Two attacked her friends but the rest moved to attack Vanessa, herself. They moved with care for the learned from Takeshi that her powers had awaken. Vanessa ices the floor knocking a few of their feet then hits a few with fire. Her friends defeat their foes like true ninjas of the Hanzo clan. Takeshi yells to bind Vanessa's hands, The hand moves into a more trapping and defend mode. Vanessa and her friends defeat the Hand ninja, Takeshi was killed and the other Hand left as more Hanzo clan arrived. Unknown to Vanessa, Takeshi would return as the villain Revenge. Vanessa traveled the world and meet the hero New Green Goblin 2099, she is ask to join New SHIELD 2099(Earth-928.2).

In 2101, the mythical city of K'un-Lun return to the Earthly plane, the mythical city would periodic materializations on the Earthly plane. Only another way was accessible from Earth through an interdimensional nexus that opened once every ten years. Agent Vanessa code named "The Ninja" was sent with Jillian Wong, Deadpool and Blade 2099. It was learned that the Hand lead by a new leader a mysterious ninja was also heading to the city.

Vanessa and the team arrive the city gates have been broken, city defends are fighting the Hand. Vanessa, Jillian Wong, Deadpool and Blade 2099 learn that the Yü-Ti has been imprisoned by someone called Revenge the new leader of the Hand.

Vanessa is an Omega Level Mutant. She can control both Fire and Ice. Recently her powers, skill, and awareness have been all augmented to vastly higher levels; when she plunging her fists into the molten heart of Shou-Lao the Undying giving her the power of the Iron Fist, while the extent is unknown, it was stated her sense of self has grown ten thousand fold and her capabilities now posses infinite depth.

She was trained almost from birth to be a ninja by The Hanzō Clan.

Without increasing her strength with chi, she possesses the peak human level of strength a woman of her age, height, and build that exercises intensively. She is capable of lifting at least twice her body weight and can press lift at the very least 240 lbs.

She needs oxygen the make fire. Creation of ice may depend on the amount of moisture available, dry areas could make this harder or impossible.

Equipment: Cyber Ninja suit: Is a suit made of nano-machines designed by Andros Stark, which uses stealth technology, teleportation technology and Wallrunning Tech.

Weapons: Vanessa currently carries a katana. She can focus her powers to create fire or ice Katana or a crossbow. Vanessa also carried and employs a pair of katana as well, Shurikens, twin sais, long daggers with narrow blades and twin blade guards. She is also proficient with the sansetsukon (three-sectioned staff), and other martial arts weapons. She can kinetically charge weapons with chi energy, when charged, her weapons glow. She can use them to slash, stab, and throw.

Retrieved from "https://marvelcomicsfanon.fandom.com/wiki/Iron_Fist_2099?oldid=155518"
Community content is available under CC-BY-SA unless otherwise noted.