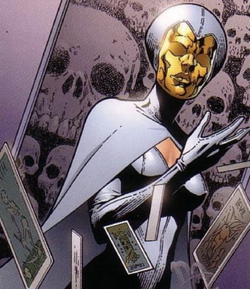 You may think you know what's best for you... but you don't.

When she was growing up in the mid-1900's of England, Irene Adler was often sought after for advice and fortune telling. Unbeknownst to the people who sought her out, she was truly capable of telling the future through her mutant ability of precognition, but she was often overlooked due to her blindness.

However, she was eventually found by another mutant woman named Raven Darkholme, who was capable of shape-shifting. The two fell in love and decided to use their abilities to pave the way for their own future. Eventually, Irene foresaw a vision about an immensely powerful mutant who had the potential for either great evil or great valor. The vision came true when they discovered a mutant baby who accidentally sucked the life out of her entire trailer park. Mystique and Destiny were able to recover the baby and move her far away so that they could raise her on their own.

Irene was much more prominent in the baby, Marian's life as she was growing up. The two had a deep connection, and Irene even grew to love the baby. Mystique eventually returned to them with the invitation to join the Brotherhood of Mutants, and Irene convinced Marian it was the best thing for them to do.

Even after Marian, now going by Rogue, abandoned the Brotherhood, Destiny stood by Mystique for the next several years. She helped Magneto and the Brotherhood prepare for incoming threats. However, before she could have a vision of the incoming onslaught on Genosha, a sleeper assassin in the form of the Chameleon was sent in to slit Destiny's throat, using the form of Mystique to sneak up on her.

[[Category: In a Relationship with Raven Darkholme Characters]]
Retrieved from "https://marvelcomicsfanon.fandom.com/wiki/Irene_Adler_(Earth-101)?oldid=250072"
Community content is available under CC-BY-SA unless otherwise noted.