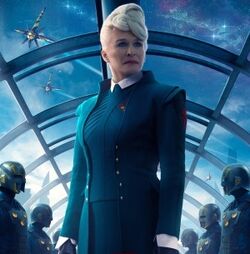 After centuries of war between the Nova and Kree empires, a peace treaty established by Nova Prime Irani Rael and the Kree Emperor. Unfortunately, the peace was not accepted by many Kree, notably the fanatic, Ronan the Accuser, who openly defied the treaty to commit acts of terrorism against Xandarian outposts. Rael appealed to the Kree for some form of action or official condemnation of Ronan's actions but the Kree refused, seeing it as a Xandarian affair. Subsequently, Rael was informed by Denarian Saal that they had just captured one of Ronan's compatriots, Gamora.

Denarian Dey later informed Rael that he had been contacted by Peter Quill that Ronan was in possession of an Infinity Stone and was going to attack Xandar, but Quill had rallied the Ravagers in defense of Xandar. Though the news alarmed Rael, Saal believed it to be a trick. However, Dey sincerely believed that Quill and his compatriots were coming to help. Rael then ordered an evacuation of the capitol city and deployed the Nova Corps to assist the Ravagers against Ronan.

Following Ronan's defeat, Rael showed Quill and Gamora that Quill is half-human, human on his mother's side, but his father is an unknown, ancient alien species. As soon as Rocket and Drax the Destroyer joined them, Rael expressed the Corps' sincere gratitude to the Guardians of the Galaxy and instructed them to follow Dey to the rebuilt Milano. Afterwards, the Nova Prime placed the Infinity Stone in a secure vault.

Retrieved from "https://marvelcomicsfanon.fandom.com/wiki/Irani_Rael_(Earth-1010)?oldid=98862"
Community content is available under CC-BY-SA unless otherwise noted.