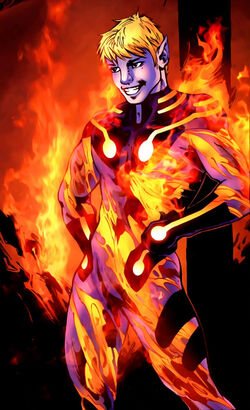 Unlimited power, a human could never handle. Why me? I couldn't hope to know. It will be what I do with the power to determine whether I should have ever existed.

Invader was a clone made from the Invaders in the era of Marvel 2099. It is currently unknown who his creator was, but it's believed he is a combination of Alchemax and Weapon X technology. He first appeared in Superior Spider-Man #16. He was present with Spider-Man (Miguel O'Hara) when the temporal anomalies reached 2099. He'd seen the WWII fighter planes reminded him of his roots. Curious, he shrank down and rode on Miguel when he went through into the present day.

Upon entering New York City, Steven split off from Miguel and began adventuring in the city. He began creating a scene in downtown New York City, and was mistaken for a villain. He briefly encountered the Uncanny Avengers, and after battling Captain America, realized his error and fled into space. There he met Norrin Radd, the Silver Surfer. He explained himself to Norrin, who had predicted his coming to the present. He trained in his powers under the Surfer, and began fighting crime with him on Earth. Norrin eventually introduced him to the Avengers, and returned into space. Captain America accepted Invader into the Avengers.

Cloned Physiology: Steven Hammond was cloned from 8 of the original Invaders, and thus shares their powers.

Retrieved from "https://marvelcomicsfanon.fandom.com/wiki/Invader_(Earth-928)?oldid=256359"
Community content is available under CC-BY-SA unless otherwise noted.