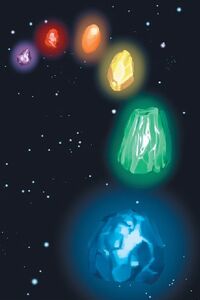 Place of Creation
Before the beginning

Before the beginning, when the One-Above-All had yet to create existence, the Living Tribunal was tasked to craft six gems which signified and could be used to control all aspects of the universe.

Knowing its creator was not capricious, the Living Tribunal did so, not knowing what they would be used for or why their existence was required.

Endowed with power beyond its usual limits, the Living Tribunal created the gems and cast them into the universe at the moment of its inception.

Eventually, each Gem fell into the hands of different groups and entities.

Galactus, the Abstract Entity who balances the universe and cages Abraxas, found the Reality stone and hid it within his spaceship. The Reality stone allows the user to create perfect "illusions" as well as change how a given entity functions, allowing someone to transmute one entity into another (I.e. transmuting a small river of acid into a large amount of bubbles for as long as one focuses on it). It cannot allow a user to kill another being, even if altered into strings the affected being would still be alive.

The Soul gem found itself guarded by Omnipotence City, every lower god in agreement to protect such a powerful artifact from any who would misuse it, even themselves. The Soul stone grants its user the capacity to truly see someone's nature and manipulate life and death.

The Mind stone found itself embedded in material which would be collected and used by Ego, the Living Planet, who took notice of the item and hid it next to his core. The Mind stone grants the user psychic powers, such as telepathy and telekinesis, and resistances to these abilities.

The Space stone was found by one of the Elders of the Universe, The Gardener, who used it to travel the cosmos and continue his life long desire. The Space Stone allows its wielder to teleport across the cosmos, create portals, manipulate gravity, and manipulate distances. It also allows a user to phase themselves and others out of sync with the rest of the universe.

The Time stone was found by the Vishanti, who kept it to themselves, a last resort against malevolent beings of dark magic. It grants the user the powers of clairvoyance, timeline viewing, the ability to slow, hasten, and halt time, and the capacity to travel through time.

A group of space-faring mortal species banded together to create a prison for the absolute worst and most dangerous beings throughout space, and for the power source they utilized the Power Gem, though they know not what it truly is. The Power gem can, in addition to being used as the most powerful energy source in existence, augment the user's inherent physical capabilities greatly and grants tremendous energy projection and manipulation abilities. It also allows a person to utilize the other Infinity stones without draining their own life energy, and is what powers them beyond their normal levels.

There are two limitations to the Infinity Gems. One is the life-force of the user, which without the Power stone would be what is used to give the Gems their strength. Therefore, a person with a stronger life-force could use the Gems in a more potent manner than someone with a weaker life-force.

Another is precision, the powers granted by the Gems can lack the nuances desired if a user doesn't have all of them at once. For example, having only the Space stone would grant the user the capacity to teleport, phase, manipulate gravity and so forth, but it would be difficult to "aim" so to speak. Also possessing another Gem, such as the Mind Gem, would grant them far greater precision with the powers given by both Gems. Having more would give an exponentially finer usage. Having all six would grant the user, in effect, perfect aim and handling of the Gems.

If two persons are linked to the united Infinity Gems, the person with the greater will or significantly easier change to reality will have their desire supersede the other user's.