Infinity:The Avengers is the first film of the Infinity Universe movie series. It is influenced by Star Wars. This film is directed by George Lucas, produced by Christopher Nolan and scripted and supervised by Joss Whedon. This film stars Robert Downey Jr., Chris Evans and James Earls Jones. 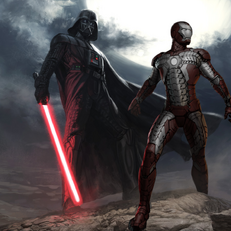 Teaser Poster: The Iron Fury vs Star Vadar
Add a photo to this gallery

In a distant galaxy far far away, in ADBY 5, the I.N.K organizations and the Intergalactic Crime Patrol ally with the Interuniverse Governmental Parliament to discuss about the politically feeble situation of their universe. Since the expansion of crime around interstellar locations, the republic attitude has not developed any changes to prevent corruption as technology advances in this modern era. After the unwelcome discussion, the I.N.K organizations concludes the debate with democracy ruling with republic parties being bashed out. The governmental parties are outraged and in rage and torment, form a revolution to bring back their rule and the new revolutionary organization that has been created on democracy`s path, is named as the Jedivengers Forces, led by Maul Parker (in Star Wars Canon, Darth Vadar).

Retrieved from "https://marvelcomicsfanon.fandom.com/wiki/Infinity:_The_Avengers?oldid=126405"
Community content is available under CC-BY-SA unless otherwise noted.