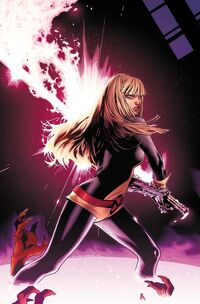 Illyana Rasputin (born Illyana Nikolievna Rasputina) was born in the Ust-Ordynski Collective farm, near Lake Baikal, Siberia, Russian SFSR, Soviet Union to Nikolai Rasputin and his wife Alexandra Natalya Rasputina. Illyana's two older brothers, Mikhail Nikolaievitch Rasputin and Colossus (Piotr "Peter" Nikolaievitch Rasputin) were both mutants. The X-Men suspected Illyana to be a mutant as well, but they figured that years would pass until her adolescence and the emergence of any possible powers. They were wrong in this hypothesis, however.

Colossus' superhuman powers manifested while saving Illyana from a runaway tractor When she was six years old, Illyana was abducted and brought to the United States by Arcade, who used her and several other hostages to coerce the X-Men to assist him in opposing Doctor Doom. She was rescued and brought back to the X-Mansion.

Shortly thereafter, Illyana was kidnapped again, this time to the Limbo dimension by Belasco and S'ym, inhabitants of this demon dimension.[5] She was raised there and a portion of her essence/soul was corrupted by Belasco, who sought to claim her soul in order to use it as a key to bring forth the Elder Gods to rule Earth. In order to free himself, Belasco needed to fill the Beatrix Medallion with five bloodstones. The blood stones would be created by corrupting Illyana's soul, with a new stone appearing as her corruption deepened. She was later rescued and tutored in the practice of white magic by that dimension's version of Storm (who turned to magic when her mutant powers waned) and eventually rebelled against Belasco. Finding the use of magic abhorrent, Limbo's version of Shadowcat, known as Cat, kidnapped and trained Illyana in hand to hand and sword combat.Cat along with Illyana attempted to storm Belasco's citadel and kill him after her training. They were overwhelmed by Belasco who further transformed Cat into a more feline demonic creature. With Illyana back under his control, Belasco was able to instruct her in the art of black magic in the hopes that it would further corrupt her soul. However, Illyana covertly plotted Belasco's defeat and continued to resist the dark influence on her soul.

Before he kidnapped Illyana, Belasco used both Storm and Cat as potential gateways to freeing the Elder Gods by manipulating their souls with his evil. Both refused his magic before the process could be completed. Because of this, Illyana formed a mystical bond between both Storm and Cat once she too was used in the same manner. Belasco was successful in using Illyana to create three parts of the bloodstone pendant and only needed two more in order to bring forth the Elder Gods. Realizing this, Illyana created the Soulsword and took over limbo as its new ruler. During her battle with Belasco she magically developed horns, a tail and fangs. She discovered that these new features only appeared when she held the Soulsword. After winning the battle, she banished Belasco from Limbo and claimed S'ym as her servant. She then managed to return to Earth several years older, although no time had passed on Earth since her kidnapping. She subsequently joined the New Mutants

She has feelings to William Marshall and so does he

Retrieved from "https://marvelcomicsfanon.fandom.com/wiki/Illyana_Rasputina_(Earth-FF9142915)?oldid=138266"
Community content is available under CC-BY-SA unless otherwise noted.