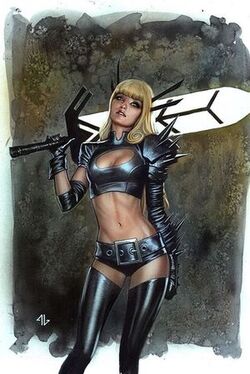 I'm going to cut off Apocalypse's head and mount it on my wall.

Illyana Rasputin was raised by her older brother, Piotr, on their family's farm in Russia. However, when she turned 13, her mutant abilities manifested and she became lost in the realm of Limbo, where she harnessed her powers and fought for survival, becoming a killing machine and finding her way back to her brother just in time for them to be recruited by Magneto.

They joined the X-Men to fight against Apocalypse, and Magik often found herself forbidden from fighting by her brother, which irritated her to no end. She would eventually get the chance to save his life from the Horseman of War, which led to him accepting that she can take care of herself.

Retrieved from "https://marvelcomicsfanon.fandom.com/wiki/Illyana_Rasputin_(Earth-9999)?oldid=245816"
Community content is available under CC-BY-SA unless otherwise noted.