You call yourself a magician? You don't even know the meaning of the word!

Illyana Rasputin is the little sister of the X-Man Colossus. As she grew older, her mutant abilities developed and it became clear that she had an aptitude for the mystic arts. She joined the X-Men, and even began training with Doctor Strange, eventually going on to join the Ultimate Alliance to fight the Cabal. 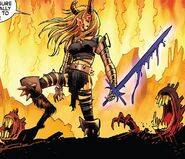 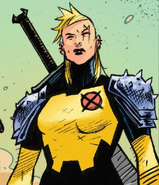 Guardians of the Future
Community content is available under CC-BY-SA unless otherwise noted.