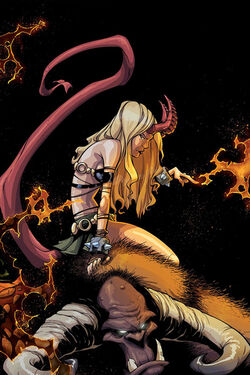 Ugh. I thought Hell on Earth would be more entertaining.

Illyana Rasputin's mutant power gave her a spiritual connection to the in-between realm of Limbo. From a very early age, she caught the attention of Mephisto, who began to groom her to one day accept her role as the Queen of Hell.

When the Order of the World Tree began their Siege on Midgard, Illyana saw no other option than to accept Mephisto's offer, eventually helping to broker an alliance between the Order and the Brotherhood of Mutants, becoming reunited with her older brother, Colossus.

Retrieved from "https://marvelcomicsfanon.fandom.com/wiki/Illyana_Rasputin_(Earth-2001)?oldid=262346"
Community content is available under CC-BY-SA unless otherwise noted.