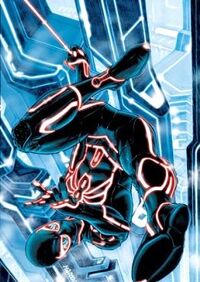 During his research into what would ultimately become the super-soldier serum, Dr. Abraham Erskine outlined a special Brazilian revolutionary diet and isometric exercise regime that he theorized would create a super-soldier. However, because the diet and regime required a lifetime of adherence in order to produce the desired results, this research was rejected by the US government, and when Erskine was assassinated, it was passed down through his family, finally ending up in the hands of his grandson, Brian Van Patrick. When his sons Ian and Michael were born, Van Patrick decided to test out the diet and the exercise regime on his boys to see if his grandfather's theories were right. As it happened, the theories were right, and within twenty years, Ian and Michael Van Patrick became the greatest student athletes in the country, earning scholarships to the University of Kentucky. However, when reporters discovered that Michael and Ian were the great-grandsons of the man who created Captain America, they came under heavy scrutiny. Though the testing all showed that their abilities were due to training, Ian and Michael lost their scholarships, and nearly lost every award they'd ever received.

Brian had discovered that people over at Camp Hammond were interested in his boys becoming heroes. Ian was more interested in going than Michael, but he was convinced. So they both pressured their dad into allowing them to go to Camp Hammond. He gave them his approval and they were off.

At Camp Hammond, he and Michael broke the course record for non-speedsters, impressing most of the other trainees and SHIELD members. They were immediately put on a Team Red. After lasting though more training, Michael, Ian, and a girl named Felicity were dubbed the Scarlet Spiders.

While Michael began a romantic relationship with teammate Felicity, Ian found love with a girl named Abigail Boylen. An incident occurred during a training exercise, where Armory's Tactigon went out of control. Team Red was sent in to contain the situation. Michael saw a beam from the Tactigon heading towards Abigail and he tried to protect her. He was to late, by the time he had Abigail, she was already dead. Ian came over and pushed him out of the way. He blamed himself for Abigail's death because he could have moved faster and saved her life. Ian fell into a deep depression afterwards.

Two nights later he left a suicide note in the spot where Abby died and then he went to the Camp's armory to retrieve the Tactigon. He began hitting it, in an attempt to destroy it. Ian punched the Tactigon so hard that he sliced his hand open and his blood dripped into the device. This caused it to activate and fire. Ian jumped up and grabbed onto the ceiling before the beam hit him. It tore down the nearby wall and went clear across the camp. He tried to shut it off, but he couldn't, so he ran away.

Ian was tackled by his brother, who preceded to punch him. Ian explained what happened and that he was sorry for it. Then the armory disintegrated and a someone that looked like the brothers emerged wearing the Tactigon.

The man fired a beam from the Tactigon at Michael and Ian. Ian was pushed out of the way by his brother. Then Michael began to run towards the man. He narrowly missed being hit by another beam. Before he could get up, the man slammed the Tactigon onto Michael's head. Ian tore a pole out from the ground and threw it at the man. The pole impaled his chest, but he just stood there. Then the pole seemed to be absorbed into his body and his wound had healed.

Their fight had attracted the attention of other trainees and faculty. The man with the Tactigon turned his attention to the crowd at fired at them. Felicity was tending to Michael, when she saw her mentor being killed by the man. She tried to run after him, but Michael grabbed her ankle. She wouldn't be able to stop him, they needed a plan first. Felicity helped Michael to his feet and they regrouped with Ian.

The Scarlet Spiders were on their way to fight the man destroying Camp Hammond. They had formed a strategy to distract him, while the two others attacked. Michael sprayed webbing onto the man face and slammed him into the ground. He ripped a piece of concrete out of the ground and used it as a shield. While the man fired upon Michael, Ian and Felicity snuck up behind him and they began their assault. Ian tied up the Tactigon with webbing and Felicity attacked him at close range. The man was randomly firing the beam to try and hit them. To stop him, Felicity webbed his arm up to and held it back. Michael joined his team and did the same thing. They pulled together in an attempt to tear the Tactigon from his arm. When they did this the man fired a beam at the same time and it went through his head.

His body fell to the ground motionless. His death was an accident, as Team Red planned to only immobilize him. The entire camp was destroyed and everyone was dead. One aircraft survived the destruction and the Scarlet Spiders took it to find help.

The man who had apparently died by his own hand, had actually survived. Because he was a creation of the Tactigon, he could not be killed by it. Technically he was a machine and Ian only served as a genetic template for him to form his body. He was filled with the anger that Ian felt at the time of his accidental creation. He was killed in action, so he took that as his name as he searched for the ones responsible for his early demise. The world had already been taken over by the cosmic being Proteus (more...[2]), so he formed an alliance with him. During an attack from the Resistance, also known as the Avengers, KIA spotted Spider and felt that he was his creator.

He fired his Tactigon at the only member of the Scarlet Spiders left. Spider narrowly missed being annihilated by the beam and he looked shocked to see the man once more. Spider kept fighting, but could not focus his attention on KIA, who relentlessly attacked him. As KIA used the Tactigon more, it began to cover his entire body until it was fully coated with the Tactigon itself. Spider was eventually overrun by Proteus' forces and KIA prepared to kill him. Ian's mask was shredded and covered in his blood like the rest of his armor. He closed his eyes, knowing there was nothing he could do to stop his death. The voice of a young man commanded KIA to lower his weapon. Ian lifted his head and saw Proteus' newest herald, the Silver Surfer. The Surfer placed his hand on Ian's head and converted him into another Herald of Proteus.

When brought before Proteus, Spider was told that he would be the one to kill his father. He stood by his master's side, as he revealed his plan to conquer the cosmos and rule it as he wished. The only resistance that stood a chance at angering Proteus was the Avengers. The ensuing battle would have one certain outcome, the deaths of all who opposed Him.

Naturally Enhanced Physiology: Due to a lifetime of a special revolutionary diet that was obtained in Brazil and special exercise, Ian Van Patrick has strength, endurance, and agility comparable to Captain America.

Lost scholarship due to the fact his great-grandfather was the man who created the Super-Soldier Serum and the fact that Ian's powers might have been derived from said serum.

Retrieved from "https://marvelcomicsfanon.fandom.com/wiki/Ian_Van_Patrick_(Earth-826)?oldid=25902"
Community content is available under CC-BY-SA unless otherwise noted.