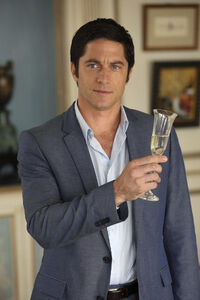 However, Ian caught her in the act, for which she silently wrote on a pad that S.H.I.E.L.D. was spying them, and suggested to find somewhere to talk. Removing her earpiece, Skye explained to Ian Quinn how she managed to infiltrate S.H.I.E.L.D., as Ian Quinn corroborated that they tend to prey on those with records, providing a false sense of family in recruitment. Ian Quinn was quickly alerted to the security breach as Coulson entered Dr. Franklin's lab resulting in Quinn holding a gun to Skye. Though she quickly snatched it away and fled out the window rather than pull the trigger. During Grant Ward's fight with Ian's men, Quinn and his aide escaped to their helicopter.

Later, Quinn received a call from Coulson, warning that his plane will be shot down if he enters the territory of any S.H.I.E.L.D. ally. Quinn ended the call by telling him that the Clairvoyant says "hello."

However Garrett and Ward freed him from the Fridge and The Clairvoyant got the "gravitonium" back to him.

Retrieved from "https://marvelcomicsfanon.fandom.com/wiki/Ian_Quinn_(Earth-1010)?oldid=49776"
Community content is available under CC-BY-SA unless otherwise noted.