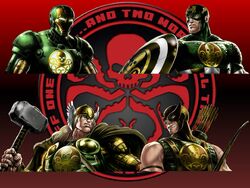 The Hydra Four were Hydra versions of the Captain America, Thor, Iron Man, and Hawkeye sent into Manhattan to cause havoc in an attempt to draw out the Avengers.

Equipment: None known.
Transportation: None known.
Weapons: Each member wields a weapon/weapons that is based upon the person they are mimicking. Hammer wields a hammer that allows him to send out EMP pulses, cause electrical surges to mimic lightning, and can be thrown, and return to his hand. Militant wields a shield similar to Captain America's. It is made out of an unknown alloy, but is capable of bouncing and ricocheting off objects and people. Bowman's arrows are known to be trick arrows, among them there are explosive tipped and bolas. Tactical Force has the standard Iron Man repulsors, flight capability, and enhanced strength.

The Super Hydra Agents were created by Hydra to kill the Avengers.

Retrieved from "https://marvelcomicsfanon.fandom.com/wiki/Hydra_Four_(Earth-1010)?oldid=64151"
Community content is available under CC-BY-SA unless otherwise noted.