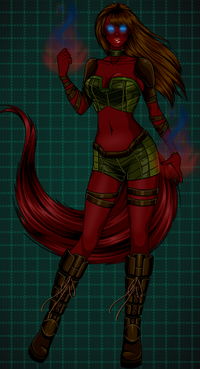 Single
Occupation
HYDRA infiltrator, Student; Formerly slave, warrior
Education
Taught by those of her people, mostly warriors
Origin
Origin
Part of the Mephistioid race under Shi'ar control, though is considered a mutant sub-species thanks to her unusual appearance and secondary power
Place of Birth
Home planet of the Mephistioids, name unpronounceable
Creators

I burn with the desire for revenge and to rid of my enemies.

Like most Mephitoids Hyacinth was born on Tryl'sart, though that is the current name with the Shi'ar ruling it currently. The original name is unknown. Her village was like those scattered about the jungle like planet, and her parents were deeply rooted in belief of being strong warriors despite the fact they were of middle-ranking themselves. But when their daughter was born and seemed of an unusual kind they seemed hopeful she could have a better fate then they once did. From the day she turned one her parents began to work in training and teaching Hyacinth everything they could.

But throughout these years they're raising turned out to be pretty harsh on Hyacinth who, as she got older, began to resent her parents a little. In fact she felt they were pushing too much hope in her being able to reach higher levels and maybe be part of the Imperial Guard. Something of which the young feline alien didn't want. During these years Hyacinth picked up quickly on many things, especially showing being a natural combatant, acrobatic, and athletic which pleased her parents immensely. She also learned how to use firearms, swords, and tonfas, two of which she has today that can also eject a blade along the outer sides. By the age of 13 Hyacinth was to join many of her fellow warriors in being taken to join the Shi'ar army or breeding stock to further expand the empire. But instead she decided to join in the rebelling against the Shi'ar.

For little over three years she helped in sabotaging ships, stealing supplies, interfering with trade routes, and participating in raids. Though eventually the crew she was with was captured by two Imperial ships, prompting Shi'ar warriors to arrest them. But it was at this moment Hyacinth began to fight back before her power of manipulating fire showed, this color though being a dark blue in color, causing the Shi'ar to realize she would likely make for quite the warrior. But in her anger the flames flared up, causing the Shi'ar and her supposed crew to be blasted back long enough for her to bolt.

Taking a shi'ar ship escape pod she set coarse for a random galaxy, wanting to be rid of the shi'ar rule and expected job of her parents.

My kind of Crowd

During her travels though, Hyacinth would come across the Skrull brothers Veris and Talon by chance who were fugitives of their own world. Seeing Veris immediately smitten with her, Hyacinth began subtly using her pheromones to control Veris, causing him to allow her to journey with them despite Talon's protests. Being ignored, the feline alien was soon a third member of their crew as they traveled across the galaxy before coming across Earth where they intended to stop but not before SWORD got a hold of them. Once in custody of the agents, the three were separated but by a weird chance, Hyacinth was interviewed by an undercover HYDRA agent who saw the chance to recruit an outsider for the cause.

After some convincing, Hyacinth agreed to help HYDRA and became an infiltrator under them when the three were reunited and sent to the Avengers Academy when thinking of nothing else. Though the hope was for them to be shaped into heroes, Hyacinth instead plays along to gather intel for HYDRA and making Veris her pawn of sorts to help in such goals.

As a Mephitioid Hyacinth has many cat-like abilities, but on top of that she could be considered a mutant sub-species. She has the following powers:

She has the average strength of a human woman her age and height who engages in intensive exercise.

Retrieved from "https://marvelcomicsfanon.fandom.com/wiki/Hyacinth_Calcite_(Earth-7194)?oldid=163443"
Community content is available under CC-BY-SA unless otherwise noted.