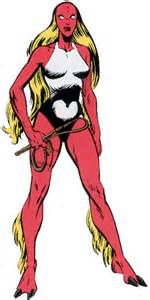 Little is known about Hussar's life before Deathbird's coup d'tat against her sister, Lilandra. It can be assumed to be similar to her mainstream counterpart.

Hussar was one of the Imperial Gaurdsmen that aided Deathbird in taking the throne. She was one of the guardsmen to the throne room, partnered with Neutron. Ultimately the two were defeated by the Ultimate Alliance, and were most likely imprisoned after the heroes defeated Deathbird and freed Lilandra.

Channeling of bioelectricity into other living beings to shock their nervous system and paralyze their motor functions.

Equipment: None known.
Transportation: Various Shi'ar starships.
Weapons: Her neuro-whip somehow affects the nervous systems of the people she hits with it.

Retrieved from "https://marvelcomicsfanon.fandom.com/wiki/Hussar_(Earth-6109.2)?oldid=154679"
Community content is available under CC-BY-SA unless otherwise noted.