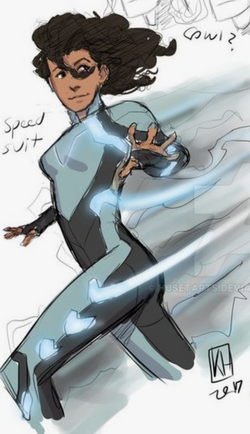 Whatever you guys are planning on doing, I can get it done faster.

Hunter Lewis is the third child in a middle class Guatemalan family. She was born just a few years before the rise of Apocalypse, whose forces detected her mutant DNA and pillaged her home town, assassinating her entire family. She was then taken and placed in a mutant training center, where she was raised and educated by Mister Sinister.

Eventually, the X-Men staged a raid on the training center and freed several young mutants. Hunter, who had since mastered her super speed, helps them and joins them when they return to Krakoa, in the hopes of joining the fight against Apocalypse.

Retrieved from "https://marvelcomicsfanon.fandom.com/wiki/Hunter_Lewis_(Earth-9999)?oldid=245792"
Community content is available under CC-BY-SA unless otherwise noted.