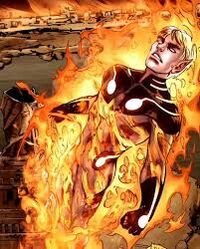 Relur Hammond was one of the three unnamed children that Marrina and Namor McKenzie had. His egg was found by Jim Hammond, a retired garage mechanic in Blaketown, New Zealand and who had be at one time the first Human Torch. When he broke the shell Jim imprinted Relur with his "Horton Cells" that acted like DNA, they gain Jim his Pyrokinesis. Relur grew up mostly normal, except for his odd appearance. He had small vestigial feathered wings on his ankles, pointed ears and gills behind his ears. When he started to burst into flame but without harming himself, Jim revived that he use to be the first Human Torch and then started teaching Relur how to control his fire powers.

Relur set out has the new Human Torch, hero to New Zealand. The Torch soon decided to take up a job as a police officer. Here he ran into Fearmaster, who was working for Slivermane. Slivermane was trying to get a foothold in the New Zealand government by replacing the Prime Minister, John Key with a David Icke style shape shifting reptilian alien. The Human Torch saved the Prime Minister and the fake was place in New SHIELD 2099 (Earth-928.2)'s holding pin, Fearmaster was teleported away before he could talk. (More coming)....

Low Light: The Torch's light output is mostly in the infrared region of the spectrum, and is invisible to the unaided eye. Less that 10% of his total power output is in the visible portion of the spectrum. Thus, the Torch, when aflame, is dimmer than one would expect of so powerful an energy source.

Water Deficiency: When not exposed to water, many of Relur’s physical attributes gradually decline and can reach a point where he possesses only a small fraction of his powers. Relur's strength, stamina, and durability are affected most and, at their minimum known level, are much closer to the levels possessed by the vast majority of other Atlanteans. Renewed exposure to water will immediately restore his abilities.

Pollution: If Relur is immersed in or exposed to polluted water, it can have a negative effect both on his physiology and the efficiency of his physical attributes.

Equipment: Unstable molecules costume: A special outfit designed for The Human Torch 2099. The costume is designed with fourth generation unstable molecules, allowing him to alter its styling by thought, permitting him to change his costume, which are attuned to his powers, allowing it to become burst into flame when he does. The Human Torch's costume has a complete data processing and telemetry system woven into its fabric on a molecular level, making it a wearable computer. The costume forms a network, providing a constant, real time uplink of everyone’s physical condition as well as their location and current situation. The costume is capable of displaying data and has touch-pad controls on the gauntlets. Its sensors can track all of the team’s uniforms and provide a picture of their immediate vicinity. The costume has an intricate scanner system which can detect things around the wearer, from how many people are in the next room to what dimension or planet they are on.
Transportation: None known.
Weapons: Neptune's Trident

Retrieved from "https://marvelcomicsfanon.fandom.com/wiki/Human_Torch_2099(Earth-928.2)?oldid=256276"
Community content is available under CC-BY-SA unless otherwise noted.