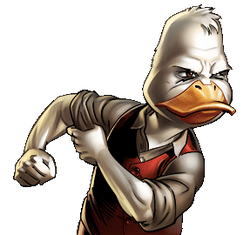 No Hair
Unusual Features
Howard's body, like those of his entire race, has similar characteristics to those of both common Earth ducks and common Earth human beings. He has hands and arms instead of wings, is covered with feathers and is unable to fly. His feet are less webbed than Earth ducks and more Human like but still bear resemblance to duck feet.
Origin
Origin
Creators

Howard the Duck appeared in The Collector's devastated archive once he returned defeated. After Cosmo licked Tivan's face, Howard the Duck asked him why he let the dog do that, calling it gross. Howard was previously captured by The Collector, being locked in a glass cage.

Retrieved from "https://marvelcomicsfanon.fandom.com/wiki/Howard_the_Duck_(Earth-1010)?oldid=130322"
Community content is available under CC-BY-SA unless otherwise noted.