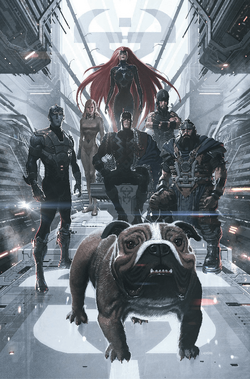 The Inhumans are an offshoot of humanity that was genetically altered by the Kree centuries ago. The Inhumans kept themselves hidden from humanity in their city known as Attilan (also known as the Great Refuge) out of fear for centuries, developing a high technological society with a focus on genetics. With the discovery of the Terrigen Mist, the Inhumans would expose themselves it in order to gain fantastic abilities.

With humanity's technological advancement growing throughout the depths of space, most especially the Moon, the Inhumans began to worry their city may be found. After the scouting reports by Triton, the current king of the Inhuman Royal Family, Black Bolt had the thoughts of deciding to move the city to a more remote and safer location on the deeper parts of the Moon where they'd remain undetected, for a short while. This location was then later dubbed as the "Blue Area of the Moon."

However, Boltagon's fierce and terrifying brother, Maximus had a growing concern regarding his king & brother's plans for the future of the Inhuman Society believing that his brother had started losing his control over ruling the society and started to have less concern and care for their own people, though in reality, Maximus' reasons were driven by paranoia and his desire of wearing the crown for himself.

Leading an uprising against his own family, Maximus took the throne and banished the Inhuman Royal Family from Attilan with the help of his cousin, the Unspoken, taking over the Attilan Society in the process. Though in the end, Maximus' revolt on starting a new movement against humanity had eventually failed after his the Unspoken betrayed him by escaping his way onto Earth and his own family teaming up up against him. After his failed attempt on taking over Attilan, Maximus was forced into exile on Earth on a small deserted island, located on the eastern side of Hawaii, while the Unspoken had made his way into the Himalayas, where he eventually had unlocked some secrets about the history of the Inhuman Royal Family.

In the wake of the earliest events during the Ultimate War which mostly had occurred on Earth, Maximus was one of the very people who had witnessed the events all around the world, traumatizing him and believing that his personal views on humanity are right after all, humans are a sickening and a wicked race driven by the hunger of power through means of war, chaos, and destruction. Later that day, Maximus also saw on the news that a series of "meteorites" have collided and have crashed on the Moon, leaving him in shock and awe, as he knew that those weren't just meteorites, they were spacecrafts that belong to a group of extraterrestrial colonizers.

Realizing what this would mean for Attilan's possible future, Maximus tried his very best into finding a way to return to the Moon in order to warn his family, who might've not been aware of the frightening and unbelievable news. Later, Maximus would eventually find his way into getting captured by the leading organization of the Movement, Hydra, before he was later discovered and rescued by the Inhuman Search Unit of S.H.I.E.L.D., which was led by high-ranking agent Daisy Johnson, who later interrogated him and questioned his origins.

The team tried their very best to break Maximus into spilling out everything regarding his past life on the Moon with the Attilan Society, but as usual the latter failed, proving how tough can Maximus be when one decides to interrogate him. That is, until one of S.H.I.E.L.D.'s most elite Inhuman agents, codenamed as Synapse, decided to use her telepathy to read his mind. However, unknown to everyone else's awareness, Maximus had been training his newly-found powers that he had recently discovered after he was first exiled on Earth, revealing to be telepathy as well.

Without anyone noticing, the two engaged in a telepathic battle, resulting with Synapse losing to his more power. As a result, Maximus then controlled Synapse's mind, threatening the other agents to kill her if they wouldn't follow Maximus' request, which was to help him get to his home, back to Attilan, so he could warn his family about the impending danger coming upon them. Daisy and the rest of the team then manages to calm Maximus down, making him let go of controlling Synapse so they could settle the situation in a rather, more peaceful way.

Though it took a few hours for Maximus to convince the team about his true origins, the team finally decided to help Maximus get into the Moon, despite the fact that Maximus' tales might sounded far too ridiculous for them to believe in.

Return of the Skrulls

Eventually, the team assisted Maximus into getting him home, teleporting themselves into the Moon as they wear their protective gear and equipment, eventually leading them into the crash site, proving that it was a series of alien spaceships after all, not meteorites. As the team investigates the site, they eventually came acroos encountering the owners of the ships, which were a race of green-skinned, humanoid shape-shifters. who even tried to copy their appearances and abilities, before they were immediately detected. Maximus then abandoned the team and decided to swiftly and sneakily goes away from their sight as they're still busy fighting off the shape-shifting aliens from killing them, running into the opposite direction that led to the undetected hidden city of Attilan, thanks to its cloaking device that has covered the whole city since it was first established.

Arriving at the invisible front gate, Maximus shouted at the royal guards, led by his cousin Gorgon, warning them that danger is coming on their way, but after noticing that Maximus had unexpectedly returned to Attilan, Gorgon orders the guards to shoot at Maximus while he questions his reason for returning without any signs. As Gorgon regrettably decided to let his tyrant inside the city, Maximus then explained everything that has happened on Earth, but after that, Gorgon still knocked him down before locking him up in an ancient cell inside the Attilan Underground, so his family could interrogate him face to face.

Medusa then angrily questioned his brother-in-law if he decided to return to Attilan so he could try and take it buy himself over again, but before Maximus could've explain everything else to the rest of the family, the royal guards had captured a group of humans, revealing themselves as the team who Maximus was with a while ago. Daisy told them they came in peace, revealing themselves to be Inhumans to the Inhuman Royal Family, just as well, and told them that all they wanted to do is ask for their help, helping in saving their city from those aliens.

Retrieved from "https://marvelcomicsfanon.fandom.com/wiki/House_of_Agon_(Earth-61615)?oldid=263664"
Community content is available under CC-BY-SA unless otherwise noted.