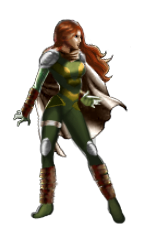 First appearance
Days of Future Past

As soon as Hope was born, her birth place, Cooperstown, Alaska, was attacked by Mr. Sinister, who annihilated the whole population of the city and took the girl captive, experimenting on her and her x-genes present since birth. However, Cable managed to save her. According to him, the baby was the messiah supposed to save both mutants and humankind.

Hope Summers is an Omega level mutant. She was born with the following powers:

Hope can psychically duplicate the power-signature of mutants physically near her. Although she does require close proximity to subjects, she does not need to physically touch them (as with Rogue), nor does it appear as though her using a subject's powers deplete their own power level. Additionally, Hope can duplicate multiple power-signatures concurrently with seemingly no limit. However, her duplicated powers fade due to time, distance, and usage. She is only able to duplicate mutant powers, not those of other metahumans. The upper-limits of her powers have yet to be reached or determined.

Possesses the strength of a normal girl her age, height, and build who engages in extreme regular exercise (although this can vary, depending on what powers she has access to)

Hope's mutant powers are not fully under control and generates power levels that are potentially dangerous to people and environments around her.

Hope's ability to mimic superpowers is limited to mutants only. Therefore, she cannot duplicate the abilities of non-mutant superpowered beings (i.e. Spider-Man, Luke Cage, or the Fantastic Four).

Retrieved from "https://marvelcomicsfanon.fandom.com/wiki/Hope_Summers_(Earth-1010)?oldid=204363"
Community content is available under CC-BY-SA unless otherwise noted.