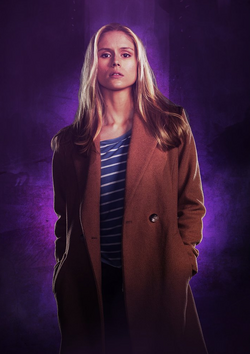 Hope Shlottman was the daughter of Bob and Barbara Shlottman and the older sister of Owen. Shlottman left Omaha, Nebraska and became a student at New York University, getting an apartment with her best friend Mei. As she attended New York University, Shlottman joined the school's track team; she was extremely proud of her accomplishments and called her parents constantly to update them. In the event of "Long Jump", Shlottman became number two in the state.

Shlottman met Kilgrave. Soon after, she quit the track team, stopped contacting her parents, except, on Kilgrave's permission, to call her mother for her birthday, and told Mei to sell her items in order to get the expected rent money for their apartment. Shlottman used her credit card, a item her parents gave her for emergencies since she was taught to be frugal, to buy expensive clothes and a man's suit.

When the one-month anniversary of her relationship with Kilgrave came, he took her to a restaurant; however, the table Kilgrave wanted was occupied. Shlottman saw the maitre'd ask the seated couple to vacate their table for her and Kilgrave. Since Niku did not make the dish that Kilgrave requested, Kilgrave had the chef find the former restaurant's chef and get the recipe.

Retrieved from "https://marvelcomicsfanon.fandom.com/wiki/Hope_Shlottman_(Earth-1010)?oldid=192435"
Community content is available under CC-BY-SA unless otherwise noted.