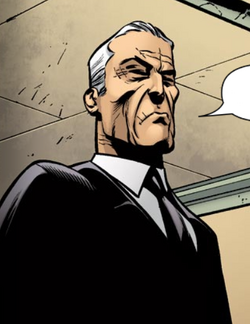 I believe that art and science are entwined. The Devil, and God, is in the details. I don't want the people to see my work and know it works. If they gave a second glance, I want it to be out of awe, not disgust.

He was lead researcher on parasitic organisms at the agrochemical lab we raided, based on his expertise we believe he is the key to finding a cure for the Inhumans.

Holden Radcliffe was a scientist at GT Agrochemical, however he was dismissed from the company when his complete obsession with Transhumanism were deemed to be inhumane. Shortly after his dismissal, Radcliffe's old lab was attacked and destroyed by HYDRA, with all his former co-workers being killed. Radcliffe went to Romania to hide out and continue his research.

I see how it's surveillance capabilities are appealing, but there was a company that had something eerily similar, Cybertek, heard of them? Turns out they were HYDRA. They connected explosives to soldiers eyes, violence for violence sake, an ugly misuse of science.

While hiding out in Romania, Radcliffe was informed by Anon that two scientists were looking to sell technology to him. In order to test if Leo Fitz and Jemma Simmons were truly confident in their Transhuman product, Radcliffe strapped himself on a operation table and ordered Anon to retrieve the two scientists and tell them to replace his false eye with their technology, not telling them that the eye was not real. When Simmons went to apply the anaesthetic to his eye, she realised that the eye was not real. Radcliffe then revealed himself to the pair.

Radcliffe went on to question the two about the Eye Implant, noting that while he was impressed by its technology, he knew that Cybertek had similar technology and they had been revealed to be connected to HYDRA. Simmons assured that they did not work for HYDRA but S.H.I.E.L.D., yet Radcliffe dismissed the comment, saying that the two organisations are the same. Eventually Radcliffe realised that Fitz was in communication with someone and ordered Anon to activate an EMP before calling security and escort the pair out.

As Fitz and Simmons pleaded with Radcliffe to reconsider, Simmons was taken away by his men before Fitz was able to fight them off and told Radcliffe that he had to hear him out. Fitz revealed that there was a creature called Hive that was recruiting Inhumans and they needed his help to stop it, promising he could help Radcliffe discover the truth. Suddenly the lab's doors suddenly burst open and Giyera stormed in. Giyera took away the startled doctor, while attacking Anon and threatening Fitz.

We've only just begun that kind of DNA modification, to make something of your kind that's... We can only dream."
"You don't need to dream anymore.

Radcliffe was taken away to Union City where he was introduced to Hive, and was astonished to be surrounded by the Inhumans. Hive then offered Radcliffe the chance to initiate an experiment that originally created Hive, noting that the technology of the humans now matched that of the Kree and Radcliffe was the best candidate for the job. Although Radcliffe was uncertain that the task could be done, Hive assured him that it would be in his best interest to try and succeed.

The genetic make up of Inhumans in incredibly complex, we were bound to run into complications!"
"You assured me this would work."
"Yes and it would have if I'd been provided with the right ingredients.

Hive provided Radcliffe with three volunteers from HYDRA once his experiment was ready, with Radcliffe explaining to Hive that he had managed to put Terrigen Crystals into the Kree blood to ensure that the subjects underwent Terrigenesis at the same time. However as soon as the experiment went underway, Kirk Vogel and the other volunteers began screaming in agony before they skin and bones melted away into slim as their bodies reacted to the experiment.

As the corpses of the volunteers were taken away to be disposed of, Radcliffe desperately tried to explain to Hive that the experiment had only failed because the blood he had been supplied with had come from the dead body of Grant Ward and they needing the blood of a living Kree. Hive responded by grabbing Radcliffe by the throat as he begged for his life, promising that he could make the experiment work as he promised that he wanted it to work in order to change the world. Hive let Radcliffe go before walking over to the Kree Orb, when Radcliffe asked what it was, Hive did not answer but explained that Radcliffe should be terrified now.

Encounter with the Kree

You were going to handle this thing! Now we're both gonna die!"
"No ones dying here today!

Hive used the Kree Orb to summon the Kree Reapers to Union City so Radcliffe could use their blood to complete his experiment. While in his lab, Radcliffe was confronted by one of the Reapers whose blade was covered in blood. Radcliffe was defended by Giyera who battled the powerful Kree warrior while Radcliffe looked on in fear, eventually Giyera was able to outwit the Kree and broke it's spine.

These Primitives are an Abomination of science and a very poor reflection of my talents."
"They are not abominations, they're part of me and the Inhuman race. I want you to make more

Radcliffe took Hive into his lab and informed him that he was now confident that the experiment would work as he now had the right ingredients compared to the last test where he had killed Kirk Vogel. Radcliffe assured Hive that everything was in place to complete their experiment and create new Inhumans and all they needed at this stage was new volunteers, which Hive assured him that he was sourcing already.

When the volunteers Hive had spoken about earlier finally arrived, Radcliffe was horrified to learn that they were kidnapped members of the Watchdogs who were they out of their control, when Radcliffe questioned Hive about this he explained that they sometimes needed more motivation while Hellfire beat Pete Boggs with the butt of his gun while mocking him. Once he confirmed that he was almost completely confident about the experiment, Hive ordered Radcliffe to fill the shipment container the Watchdogs were in with Terrigen Mist. Radcliffe and the others then listened as the men screamed in fear and pain as they underwent their forced upon Terrigenesis.

Eventually the doors to the container were opened, revealing the men had mutated into hideous Primitives, horrifying Radcliffe. Hive however was impressed by the result and ordered the Primitives to show off their strength and bring Radcliffe to him on his knees. Radcliffe begged for his life as he insisted that he could improve upon the experiment, although Hive claimed that they would do fine while Radcliffe argued that the Primitives were abominations to science while Hive insisted that he wanted Radcliffe to create more.

Bird's visual acquit is superior to mammals, I got envious.

Retrieved from "https://marvelcomicsfanon.fandom.com/wiki/Holden_Radcliffe_(Earth-1010)?oldid=198932"
Community content is available under CC-BY-SA unless otherwise noted.