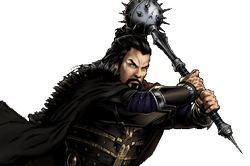 Hogun hails from the realm Vanaheim but left to join the Asgardian adventurers known as the Warriors Three, and is a friend of Thor. He was present when Jotuns infiltrated Odin's Vault while most of Asgard was preoccupied with the crowning ceremony of Thor as the new King of Asgard by Odin. When Thor became enraged by the interruption, Fandral readily agreed to accompany him to Jotunheim to exact retribution for the Jotuns' aggression.

The Warriors Three, together with Thor, Sif, and Loki, journeyed to Jotunheim where Thor challenged Laufey, the Jotuns' ruler, over the incident in Asgard. Laufey, revealing that he had strength in numbers and mindful of an ancient truce between the two peoples, dismissed the Asgardian group from his realm. As they turned to leave, Thor was baited by the heckling of a nearby Jotun, plunging them all into mortal combat. Fandral was grievously injured in the fight and Hogun had to help carry him clear. The Asgardians were saved by the timely arrival of Odin, who intervened and quickly drew then back to Asgard.

As a Vanir, Hogun has several superhuman attributes. He possesses superhuman strength, speed, agility, reflexes, durability, and is extremely long-lived.

Hogun is highly experienced in melee combat, with a particular expertise wielding a mace.