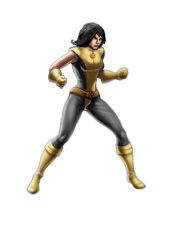 First appearance
Survival of the Fittest

No matter what happens next, you lose. There will always be the X-Men.

Hisako Ichiki lived in Tokyo, Japan with her brother and parents before joining the Xavier's School for Gifted Youngsters. She was seen among her fellow students during the televised coverage of Apocalypse's attack on Cairo.

Armor is a mutant with powers based around a psionic exoskeleton, including:

Retrieved from "https://marvelcomicsfanon.fandom.com/wiki/Hisako_Ichiki_(Earth-1010)?oldid=198458"
Community content is available under CC-BY-SA unless otherwise noted.