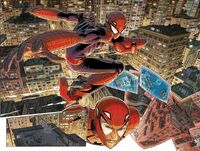 The Other Spider and I are the true successors to the Original Spider-Man, You are nothing but a fake!

Hiro was born a child prodigy whose talents were first seen at the age of ten. Hiro also possessed an admiration of Spider-Man and wished to one day be like him. Hiro's talents would also set up a successful future for him. One of Hiro's dreams was to represent Spider-Man or become his successor.

Hiro had began to get anxious about the new enemy who would be invading Neo-Japan. As Hiro's anxiety grew, he began to do some investigation on the new enemy in order to have the proper amount of prep to fight this enemy. Hiro soon confronted the Brother of Shadows. The brother said his goal was to kill Spider-man. Hiro began his attack, however, his webbing was neutralized by The Brother's advanced technology. Hiro switched his suit to stealth mode in order to plan a new tactic. Hiro decided to remain in stealth mode and switch to his taser webbing. Unfortunately, the Brother's suit was immune to electricity. Just as the Brother prepared for his next move, Luchador Spider came to Hiro's aid. Lucha Spider knocked the Brother off his feet. The Brother decided to retreat in order to repair his damaged battle suit. As the brother left, Hiro and Lucha-Spider needed to make future plans. Hiro decided to use his prototype spider exoskeleton to fight the Brother of Shadows.

Retrieved from "https://marvelcomicsfanon.fandom.com/wiki/Hiro_Takachiho_(Great_Earth)?oldid=198455"
Community content is available under CC-BY-SA unless otherwise noted.