Start a Wiki
Heroes (We Could Be) is the tenth episode of Marvel's Young Avengers' Season Two and the eighteenth episode overall.

The Super-Skrull looked up at Hulkling. -There’s a war between the Kree and the Skrulls… And we are recruiting every member of our race scattered throughout the universe.-

-I am pretty sure you are the one able to calm him down.- Wiccan told Stature.

As the two teenagers walked back inside the main room, they saw both Iron Lad and Prodigy ready to leave the mansion, with their belongings packed in a suitcase.

As soon as the two teenagers stepped on the sidewalk, they were paralyzed by a ray coming from a blue Kree ship hovering over them. They were quickly pulled in inside the vehicle that flew away, without leaving any trace of the former Young Avengers.

After some minutes, Prodigy and Iron Lad woke up and looked at the man who was piloting.

-They are awake.- A robotic, female voice informed.

-Thank you, Plex.- The man stood up and walked to his prisoners. He had white hair and was wearing a green and white outfit.

-Well, hello there.- The kidnapper smiled.

-Who are you?- Iron Lad asked.

-He’s Noh-Varr, member of the Kree race whose DNA was altered with cockroach genes include insect-like properties and join the 18th Kree Diplomatic Gestalt, a group that would try to keep peace between the Kree and Skrull Empires. Their ship was shot down by Dr. Midas and the crash killed the entire crew, except for him. Ever since he has sworn revenge on Earth, just because a human killed his parents and girlfriend.- Prodigy informed his former teammate. -And now he has joined the stupid Dark Avengers band-wagon as “Dark Captain Marvel”.-

-Anything about me you don’t know?- Noh-Varr asked, raising an eyebrow.

-Are you asking about Oubliette? I know about her too.-

-You make it no fun. You’re not supposed to know anything about me.-

-What do we have to do with the Kree-Skrull war?- Nate wondered.

-Oh, I want nothing to do with that stupid war. It was what brought me here in the first place. I captured you for more… Human matters.-

-No, not you. The other Supreme Intelligence.- Noh-Varr dismissed his A.I.. -Dell Rusk wants to interrogate you, since you’re the only Young Avengers he doesn’t know.-

-Can you please stop talking back? How old are you anyway? 16?-

-You’re getting on my nerves. Plex, play some music, please, so I don’t have to listen to this annoying teenager.-

As soon as the music started playing, Prodigy scrunched his face. -Is this The Ronette’s “Be My Baby”?-

-Shut up and enjoy the drums!- Noh-Varr danced around the ship. David and Nate looked at each other awkwardly.

Suddenly, the Young Avengers appeared inside the ship.

-Babe, isn’t this the song on Scream Queens?- Wiccan looked up at Hulkling, who nodded.

-I’m pretty sure my parents listened to this…- Kate Bishop scrunched her face slightly.

-Why don’t you leave me alone?!- The Kree fired multiple blasts at the heroes, who dodged them.

-That’s not how it works, hun.- Kate smirked, firing an arrow at the man.

-Did you really think this would do mayor harm?- Noh-Varr pulled the arrow out of his thigh and, as soon as he held it close to his face, it exploded, pushing him against the ship’s wall.

-Aliens always fall for it.- The archer smiled.

-Billy!- Prodigy called his teammate, who flew to him. -We’re going to a Dark Avengers facility and we will be dead once we’re there. We need to reroute the ship.-

-How do we do that?- Wiccan asked.

-I’ll guide you, just go to the cockpit.-

Kaplan nodded and flew inside the cockpit. -This isn’t human.- He muttered when he saw the buttons on the panel.

-Plex, put this song on loop and turn the volume up!- The Kree ordered.

-How much do you want me to turn up the volume, sir?-

-As loud as it can go.- Noh-Varr smirked.

Now, with such loud music, Wiccan and Prodigy weren’t able to communicate. Losing his patience, Billy flew back to David and Nate and fired electric blasts at their containment cells, overloading them. As soon as the cells blew up, Kaplan created a shield around his former teammates, protecting them from the explosion.

-Thank you.- David smiled, and ran towards the control panel.

Noh-Varr jumped, grabbed a pipe on the ship’s ceiling and propelled himself forward, kicking Stature’s chest and throwing her off the ship.

-Don’t worry about the Kree, Nate! Go save her!- Wiccan exclaimed.

Richards nodded and flew out of the ship, grabbing Cassandra in the air. Smiling widely, she leaned in and kissed him. He was taken aback by this and blinked repeatedly.

-Really? That’s usually what girls do where I come from.- Nate smiled.

-Remember your doubts? That maybe you weren’t a hero? This proves you are. You can be anything you want to be, not just Kang the Conqueror.- She smiled and kissed him again, tightening her grip.

Prodigy smiled as soon as he could override the system. -Just hold on, we’re going home.-

You're everything that I see

I want your high love and emotion endlessly ♫

-Who changed it?- Noh-Varr asked, still fighting the Young Avengers.

-I did.- David smirked, waving at him from the cockpit.

-No! Plex, go back to the original coordinates!-

-Now heading to the Avengers Mansion.- Plex informed the Kree.

-UberKree… That would be an awesome new option.- Hulkling smiled, punching the man in green and white.

Still holding Cassie, Iron Lad stopped following the ship around and headed to a skyscraper’s rooftop. As soon as they landed the pair started making out again, as Nathaniel deactivated his armor and pulled his shirt off.

When Noh-Varr’s ship was above the Avengers Mansion, the teenagers decided it was time to jump. Wiccan created a shield around them and brought them back to ground level.

Disappointed in himself, Noh-Varr ordered Plex to go back to the Dark Avengers’ Headquarters.

Later that night, the Kree heard a loud crash outside the facility. He looked beside him and saw Karla Sofen, who he had slept with. Standing up, he put his underwear on and walked to the source of the noise.

Laying on the ground he saw a Kree ship, with a severely injured Skrull inside, who was wearing a Captain Mar-Vell costume.

-I… I am Khn'nr…- The Skrull coughed. -I was genetically modified to impersonate Captain Mar-Vell for the Skrull Empire… And… And was given his memories… I’ve seen humans… I’ve seen what they are capable of… They are noble… And they deserve to be saved. Do… D-Do not let the war come to them.- He coughed again. -There’s an invasion coming… Protect them… D-Do the r-r-right thing while y-y-you still c-can…- Khn'nr’s eyes closed and his heart stopped beating.

Noh-Varr, despite not knowing the Skrull, was moved by these words. After giving him a proper burial and suiting up, he got on his ship.

-Hala… I need to do everything I can to protect Earth from the Kree-Skrull war.-

"Anything about me you don’t know?"

Iron Lad and Stature on the rooftop

The Young Avengers getting to the Mansion 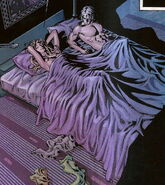 Noh-Varr hears a noise
Add a photo to this gallery

Retrieved from "https://marvelcomicsfanon.fandom.com/wiki/Heroes_(We_Could_Be)_(YA)?oldid=220343"
Community content is available under CC-BY-SA unless otherwise noted.