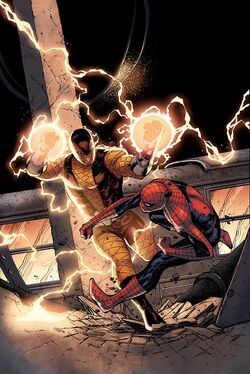 You know my name. Shocking, huh? So I'm like your funny ha ha joke now, right?

Herman Schultz was a former hired burglar and professional criminal (mostly known by A.I.M. and Roxxon Corporation) and a criminal who, after several prison terms for robbery, built a battle suit that sent out shock waves to quickly open safes as well as give himself a one-up on the authorities, to the point where in people start calling him by the name of Shocker. The Shocker had the ability to shock his enemies with his hand held vibro-shock units, but because the vibrations were so fierce, he wore a heavily insulated suit in order to keep himself stabilized and steady while he does his daily criminal activities.

During a day of his attempted robbery at Queens County Savings Bank, he once again encounters the vigilante Spider-Man, whom he defeated the first time they met, although this time he was the one who was defeated and was apprehended by the hero, causing him to get arrested by the N.Y.P.D. afterwards. Due to unknown reasons, Herman eventually escapes from his cell and trials a few several times but somehow still continues his criminal career, causing for him to become one of Spider-Man's most known well-known and oldest enemies from time to time.

At some point, Schultz and several other known individuals such as Montana and a few more had an agreement to join forces with the Scorpion and the Tinkerer, in an attempt to steal technological supplies in a seemingly abandoned but protected Stark Industries facility in Manhattan. They were almost successful in delivering the stolen supplies in a cargo ship traveling to Staten Island, until Spider-Man arrives at the spot and intervened their heist.

Spider-Man was almost defeated by efforts of their joint forces, but in the end the Web-Slinger still became triumphant and manages to finally take them all down after briefly using the stolen supplies against the super-villains, defeating Schultz and the rest. Schultz and his other subordinates were left in the ship to be arrested by the police, but manages to escape the scene even before they could've arrive, when he used the remaining smoke grenade to vanish from their sight. The police arrested the others, while Herman continued to live his life as a wanted fugitive and criminal.

Later at one point while walking in an alleyway, he was approached by a strange man in a trench coat revealing himself to be Osborn himself and recruited him to join his alliance, the Sinister Seven. Osborn tries to convince Herman into joining the seven but immediately declines his offer due to Osborn being a highly-wanted fugitive, although Norman says something that made Herman rethink if he wanted to decline or not. A few months later, it was shown that the Shocker had became one of the newest recruits to join the Sinister Seven who pitted themselves against the amazing webhead once again.

At some point later in time, Herman was somehow detained at Manhattan Correctional Facility for some time after he was apprehended by for, before being freed by Norman Osborn and subsequently joining him and the other freed inmates to reform the Sinister Seven once again. Schultz confidently rejected Osborn's offer at first, believing that he'll just get caught to whatever Osborn was secretly planning for the seven against Spider-Man. He and the escaped inmates re-approached the Tinkerer in providing them equipment, where Schultz had received his pair of gauntlets, which was now upgraded.

Upon teaming up as the Sinister Seven once again, the members questioned Osborn his true intentions and purpose on reforming the villainous alliance. Osborn smirked in response, then told his "disciples" that the entire reason of bringing back the team together was not necessarily because of the web-slinger, but because they were recruited into a much larger alliance known as the Movement, an alliance formed by several criminal & terrorist organizations, notably led by the Red Skull's organization Hydra and Mister Sinister's Brotherhood of Mutant Supremacy.

During the beginning events of Ultimate War, Schultz and his Sinister Seven teammate, Blackie Drago, who was the second Vulture, had themselves volunteered to become temporary undercover agent for one of the Alliance's organizations, Hydra, although unbeknownst to Drago and Schultz, he wasn't aware that he was going to be part of a squad unit assigned to plant several explosives underground sewers across the many cities of New York State, in order to detonate when the time has finally come. With the cooperation of the entire unit, the implantation of explosives were quickly accomplished.

However, despite the mission being successful, Drago and Schultz started to have some second thoughts on why would they even do this, not just in participating with the Movement, but also on agreeing with Osborn in bringing the Seven back together. As a result, both villains eventually left Hydra after their mission and immediately returned to the Sinister Seven to update what the organization had been up to. Upon hearing their objectives, Osborn was unexpectedly glad, since he thought that Hydra didn't have the guts to cause wreck and havoc on the community, once more after its following endgames during the Hydra Uprising and the Nimrod Invasion.

Drago's guilt complex eventually had returned later on during the last known days of the Movement, and after realizing that the Alliance's strength in powers and numbers have started decreasing thanks to all the heroes' efforts against their forces, Drago decided to warn his most despised enemy, Spider-Man, about the explosives in order to prevent it from ever detonating for the sake of saving a huge portion of the population throughout the entirety of New York, and New York itself for that matter.

Along with this decision, Drago was able to convince the only other decent member of the who still had some doubt and guilt, which was revealed to be Schultz, who implied that both his ex-wife and his brother were both living closely across Manhattan, and the risk of losing their lives still "weirdly" worries him. During the hero and the villains' meetup in the underground sewers of the city, Drago and Schultz then proved his sincerity and honesty to Spider-Man in helping the heroes out prevent the city from having another catastrophic occurrence, and by that, he swore to have himself ultimately surrendered to S.H.I.E.L.D.'s authority once all of the events going on, will be finally over.

After Drago's emotional redeeming moment, Drago and Schultz finally helped him disarm the explosives, which were all successful in the very end of it, saving New York from the wake of another impending destruction. Now seeing Drago as a new hero, Spider-Man honored Drago, along with the Shocker, for what he did, before the redeemed villain told him to go as the Sinister was coming to confront him for his actions. Before escaping the sewers, Drago then told Spider-Man to at least visit his ex-girlfriend and daughter at their apartment in Manhattan and give them a letter that he wrote to his family. As he gave him the letter to him, Spider-Man nodded in response, before swinging away from the area. From that point on, Drago never had any other regrets in his entire life.

Moments right before Drago's sacrificial death at the hands of Osborn, Schultz even tried to convince that he should come with him in escaping the Sinister Seven, though Drago refused to, believing that Osborn would never stop finding each and every one of them if they were both involved at foiling Hydra's schemes on bombing New York's underground sewer system. Right at the last moment, Drago gave Schultz his own old dog tags reminding him so that he may able to give it to his ex-girlfriend and daughter, some day after the war would have come to an end, before immediately escaping the area, with Schultz already saddened and broken, after realizing that Drago had no chance to stand against Osborn and the Sinister Six.

Retrieved from "https://marvelcomicsfanon.fandom.com/wiki/Herman_Schultz_(Earth-61615)?oldid=208693"
Community content is available under CC-BY-SA unless otherwise noted.