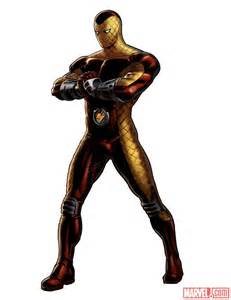 Herman Schultz was just a petty criminal, but after being jailed one too many times he built a pair of vibro units in the prison workshop. He returned to crime immediately, taking the name "Shocker", he began a string of high-profile robberies. His criminal career often brings him into conflict with Spider-Man.

Shocker was hired by Doctor Doom to become part of his Masters of Evil team. Shocker was sent to Murderworld to guard Arcade alongside Rhino. After being defeated the two managed to escape. The duo were later in Asgard guarding Heimdall.

Shocker later joined the Latverian assault on New York, helping to funnel their army into the underground. When Ms. Marvel started investigating the area, Shocker attacked and imprisoned her. Suspicious of her lost contact, the Ultimate Alliance went to find her, discovering the Latverian operation and engaging Shocker. He was easily beaten, but escaped, using the time the heroes spent rescuing their teammate to disappear.

When a now cyborg Lucia von Bardas began a bombing on the city, Shocker piloted one of the cannons, helping to destroy multiple buildings before his gun was damaged. He once again fought the Ultimate Alliance and was knocked unconscious, just like his partners Diamondback, Scorcher, and Wizard. Lucia revealed one last plan, her body now contained a bomb, and the four defeated villains powering it would level Manhattan. The heroes responded quickly, knocking the villains free, though Lucia herself still exploded.

At some point after the Fold invasion, Shocker was the only person around when Scorpion 2099 came to the past. Kron interrogated Shocker on what year it was, and responded that it was 2008. Kron then knocked him out and left Schultz for the police to find.

Shocker was among the supervillains recruited by the Hood into his crime syndicate. He and Mister Fear confronted the Ultimate Alliance after they just defeated Griffin. Though he was later knocked out by Iron Fist.

Retrieved from "https://marvelcomicsfanon.fandom.com/wiki/Herman_Schultz_(Earth-6109.2)?oldid=198000"
Community content is available under CC-BY-SA unless otherwise noted.