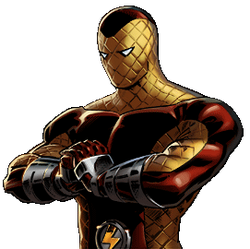 Herman Schultz's parents died when his younger brother, Marty, was a boy. Schultz was usually involved in theft or extortion; a typical day in the life of the Shocker would find him knocking over armored cars or trying to hawk items he previously stole. On one particularly ambitious day, the Shocker held New York City for ransom when he blacked out portions of the city to spell out his criminal moniker, then threatened to black out the entire city unless he was paid one million dollars. On another he terrified a stockbroker into playing the market, for substantial monetary gain.

After several prison terms for robbery, he built a battle suit that sent out shock waves to quickly open safes as well as give himself a one-up on the authorities. The Shocker had the ability to shock his enemies with his hand held vibro-shock units, but because the vibrations were so fierce, he wore a heavily insulated suit. During his first outing as the self-styled "Shocker" he ran into and defeated Spider-Man (the hero was suffering a broken arm at the time) who became Schultz's nemesis.

Early on in his career Shocker often acted as either a thief or subordinate to more prominent mob bosses such as Silvermane.

Engineer: The Shocker is a gifted, and apparently self-taught, engineer who built his battle suit from scratch in a prison workshop. He is also the (self-proclaimed) world's best safe-cracker.

The Shocker possesses the normal human strength of a man of his age, height, and build who engages in intensive regular exercise.

Retrieved from "https://marvelcomicsfanon.fandom.com/wiki/Herman_Schultz_(Earth-1010)?oldid=163774"
Community content is available under CC-BY-SA unless otherwise noted.