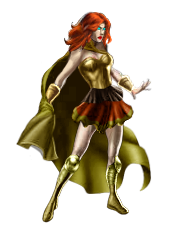 Married
Occupation
Queen of Olympus, Goddess of women, marriage and fidelity
Origin
Origin
Hera is a member of an extra-dimensional race of beings known as the Olympians, who were worshiped as gods in Ancient Greece and the Roman Empire.
Place of Birth
Samos Island
Creators

In 1919, she and Frigga, wife of Odin, chieftain of the Asgardian Gods, discovered Mark Cadmon living on the streets of Chicago, Illinois and saw his true untapped potential. They placed him among a group of other young adults who became known as the Young Gods, and when the Fourth Host of the Celestials occurred, Gaea produced the Young Gods to the Celestials as what the human race could attain if allowed to exist. The Celestials accepted the Young Gods as prime examples of humanity and departed Earth taking the Young Gods with them.

By the late 1940s, Hera --assuming her Roman name of Juno-- had relocated with the other Olympians to the planet Venus and were briefly under the rule of Aphrodite who took on her Roman name as well. When Venus came to the aid of an office girl named Lucy whose boyfriend Frank Foster became obsessed with Juno, Venus decided to let him meet her face to face. The easily jealous Juno proved to too much for Frank to handle after the goddess got into a fight with a waitress. Later, when Juno crossed paths with Venus' lover Whitney Hammond. With her romance in jeopardy, Venus returned Juno back to Olympus.

Hera possesses the conventional attributes of the Olympian gods. However, some of these powers are more developed than those of the majority of her race.

Superhuman Speed: Hera is capable of running and moving at speeds that are beyond the natural physical limits of even the finest human athlete.

Superhumanly Dense Tissue: Hera's bodily tissues are about 3 times as dense as the tissue of a human being, which contributes somewhat to her superhuman strength and weight.

Superhuman Durability: Hera's body is considerably harder and more resistant to injury than the body of a human being, or most other Olympians for that matter. Hera can withstand high caliber bullets, falls from great heights, exposure to temperature and pressure extremes, and powerful energy blasts without sustaining physical injury. Among the Olympians her durability is inferior to Neptune and Pluto and comparable to Ares and Athena.

Regenerative Healing Factor: Despite her high resistance to injury, Hera, like all Olympians, can be injured. However, her metabolism enables her to recover with superhuman levels of speed and efficiency. Most injuries can heal within a matter of hours. However, she cannot regenerate missing limbs or organs without outside magical assistance.

Immortality: Like all Olympians, Hera is functionally immortal in the sense that she is immune to the effects of aging and has not aged since reaching adulthood. Hera is also immune to all known Earthly diseases and infections.

Energy Manipulation: Apparently, Hera possesses the ability to manipulate vast amounts of energy. She typically uses these abilities for simple feats common to the Olympians such as changing her shape or teleporting herself across great distances or dimensions. She can, presumably, channel energy for destructive purposes as well.

Telepathy: Hela is also capable of reading minds by physically observing the thoughts of others, as show when she realized the Hulk's true intentions by magic.

Hera is a fair hand to hand combatant. Though she has had little experience and no formal training, her natural Olympian physical capabilities make her a formidable combatant against foes. She is also a cunning strategist and manipulator.

Class 25 ; Hera possesses a level of superhuman strength comparable to other gods.

Equipment: None known.
Transportation: Dimensional teleportation using her own powers.
Weapons: None known.

Retrieved from "https://marvelcomicsfanon.fandom.com/wiki/Hera_Argeia_(Earth-1010)?oldid=197934"
Community content is available under CC-BY-SA unless otherwise noted.