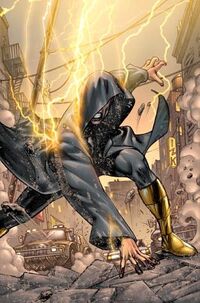 Henry was born to the Sicilian mob boss Vincent Scaletta and a poor Brazilian woman named Iara. After a failed hit, Scaletta fled to Brazil to wait until the assassins were taken care of. He was forced to leave his two kids behind in the care of his brother.

During his hideout, Vincent became attracted to a young woman who he saw often. She only spoke a little bit of English, but it was enough. Iara fell for Vincent and they soon had a child, whom they named Henry. The three continued to live a normal life in Brazil until Vincent decided to move the family to Brooklyn. Henry became close to his brother Thomas and was devastated by his early death.

Following the events of M-Day, Henry's dormant X-Gene was suddenly activated. He had no control over his newfound powers as he led a trail of destruction in his wake. The boy was deemed a threat and the MRD was tasked with bringing an end to his rampage. They cornered Henry in an energy field that negated his powers and then restrained him with a collar that had the same effect. He was taken into custody and locked away at an MRD base.

It was here that mutant experts ran daily tests on Henry to discover the limitations of his powers. The testing took a toll on his body, but it helped him gain control over his powers. It wasn't until Henry met fellow speedster and inmate, Adrianna Harrison, that he mastered his speed. They became very close and would try to see each other whenever possible. Adrianna had been a captive of the MRD since she was 12 and had a desire to see the outside world once more. Her dreams got the best of her one day as she initiated the breakout of the base's captives.

The massive prison break, led by Adrianna, seemed to be going well. This changed as soon as the MRD released a Sentinel on the unsuspecting mutants. Henry watched as the only person he cared for was killed in front of him. He was surrounded by MRD forces and they prepared to kill him as well. Fortunately, they did not succeed, as Henry was saved by a young inmate. Together, they managed to fend off the incoming MRD forces as freedom was close at hand, then the two parted ways.

The MRD released photos and a list of attributes for each inmate who escaped that day. The world discovered that Henry was a mutant and he couldn't bear to face his family. He was on the run and had to avoid everyone, but he was proud of his new life as a free mutant. Because of the nature of his abilities, Henry could easily evade MRD detection. He even managed to break into the holding facility where he was kept, to retrieve the uniform that he wore during his testing. Henry wore the suit underneath his clothes, in case he would ever need it.

Taking the name Speedy, Henry began his career as an adventurer. During one outing, a news van was on the scene of a hostage situation and Speedy took full advantage of it. He saved the hostages and returned in front of the camera where he announced who he was and what his intentions were. The entire event was staged, and when Speedy tried to leave his powers were negated. The news crew kept filming as police officers revealed themselves to be MRD officials.

Speedy fought back, but was quickly subdued. He didn't want to go back into captivity. The MRD men began to yell and fire their weapons as something was attacking them from the shadows. Their numbers rapidly diminished until only the one holding Speedy was left. The official was scared for his life and when he turned around, he was face to face with Kid Wolf. He was subdued and Kid Wolf freed Speedy, who thanked him. Speedy prepared to leave, but stopped when Kid Wolf offered him a membership to the Outsiders. He accepted happily and informed Kid about the inmate who saved him at the MRD facility. The two began their search for the next member of the Outsiders.

Before the two Outsiders could find the inmate from the MRD, Kid Wolf was given orders to investigate a situation in Portland. Unable to wait to get started, Speedy acted on impulse, grabbing Kid and running to their destination. Kid didn't appreciate the decision, but quickly redirected his attention and the burned down home before him.

From the rubble came Vengeance, who looked like a demon to Speedy. His intentions didn't look good. In response Kid attacked him, clawing at his stomach. As the wound seeped, a lava-like substance spilled out onto Kid's hands. Vengeance then thrust his elbow into the side of Kid's head. He entangled the downed Kid with his chain and began to infuse it with hellfire.

This was Speedy's cue to react. He removed the chain from Vengeance's grasp, freeing his partner. He then began to taunt his foe. As Vengeance unleashed swarms of hellfire attacks, Speedy easily avoided them, while taking note of his enemy's power set. He then instinctively ran circles around Vengeance, creating a vortex that would suck the oxygen away from him. With his flame completely extinguished, Vengeance created a hellfire portal beneath himself and vanished from the area.

Speedy was perplexed at what happened and turned his attention to Kid, giving him a thumbs up, thinking the fight was over. Suddenly a hellfire portal opened before Speedy and a fist flew forward. Speedy maneuvered out of the way, only to be surrounded by a swarm of additional portals. Fists began coming out of each one simultaneously, though Speedy was still able to avoid being hit. However he was not quick enough to miss Vengeance's chain.

It wrapped around Speedy's throat, disabling him. He tried vibrating his molecules through the chain, but its mystical properties would not allow it. Speedy could no longer breathe and the chain continued to pull back farther. Kid Wolf attempted to remove the chain, but to no avail. As he pulled, the chain seemed to have no end. His friend was clearly dying as his natural skin tone began turning red. Suddenly the chain's grasp was released and Speedy fell to the ground face first.

Kid held him up and saw how severely bruised his neck was. Speedy couldn't talk and Kid feared for his safety. They returned to base, not understanding how Speedy's life was spared.

Henry is one of the post-M-Day mutant activations. His powers include:

Speed Physiology: Henry's body is adapted towards the rigors of high-speed running. His cardiovascular and respiratory systems are many times more efficient than those of a normal human being. He metabolizes an estimated 95% of the caloric energy content of foodstuffs (normal humans use about 25%). The chemical processes of Speedy's musculature are so highly enhanced that his body does not generate fatigue poisons, the normal by-products of locomotion, which force the body to rest. Rather, his body constantly expels waste products during his accelerated respiration through exhalation. His joints are smoother and lubricated more efficiently than those of a normal human being. His tendons have the tensile strength of spring steel. His bones contain unknown materials significantly more durable than calcium to withstand the dynamic shocks of his feet touching the ground at speeds a human could never achieve or withstand. Speedy's practical reaction time is several times faster than a normal human's and the speed at which his brain processes information is heightened to a level commensurate with his bodily speed, enabling him to perceive his surroundings while traveling at high velocities. Speedy's lachrymose is more viscous than normal, thus preventing rapid evaporation and replenishment of surface fluids on his eyeballs under the influence of high wind velocity to occlude his vision.

Superhuman Speed: He is capable of running at cruising speeds faster than the speed of sound (770 miles per hour). He has sufficient energy reserves that enable him to run at this average speed for an unknown amount of hours before reducing his speed to replenish his body's store of energy. Speedy has used his powers of acceleration for various feats. He has plucked an arrow out of the air from a standing start, and has dodged machine gun fire. He has created cyclone-like gusts of wind, which are able to knock a man off his feet. He is able to run across the Atlantic Ocean and to oversea continents without having to stop, and run up the sides of buildings effortlessly. He is capable of reaching high supersonic speeds up to at least Mach 4 (3,080 miles per hour) if he pushes himself to the point of exhaustion, the true extent of his speeds are unknown. It is possible that he could run at even greater speeds if he was not limited by geological and atmospheric conditions. Speedy is also immune to the effects of friction, reduced oxygen up to a point where a human can no longer breathe, and impact upon his body while moving at super-speeds. He has traveled around the world by running on top of the ocean water and even ran all the way up Mount Everest without slowing down and went flying above cloud level as a result.

Molecular Destabilization: He is able to vibrate his molecular structure at high speeds. He has demonstrated the full effect which grants him intangibility so that he can walk through solid objects.

Temporal Duplication: By leaping only mere seconds in time, he learned to create an indefinite number of "temporal dupes" that could be controlled with a certain amount of coordination.

Superhuman Strength: Henry possesses superhuman strength in his lower body as part of his body's adaptations for running. With his upper body he can lift (press) approximately 1000 pounds while his legs can press approximately 1 ton under optimal conditions.

Enhanced Durability: He is capable of resisting tremendous impact forces that could easily crush and kill a human without suffering any serious external or internal injuries.

Quick Intellect: Henry is able to think at great speeds, contrary to his impulsiveness.

Speedy can lift (press) about 1000 pounds

Retrieved from "https://marvelcomicsfanon.fandom.com/wiki/Henry_Scaletta_(Earth-616)?oldid=197932"
Community content is available under CC-BY-SA unless otherwise noted.